- or: Interview with the girl who did the "Fuck Me, Ray Bradbury" video! 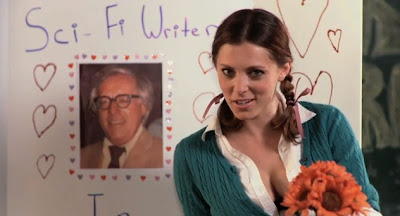 I posted the "Fuck me, Ray Bradbury" video the other day and it seems everybody is curious about the chick singer so I called her on the phone and asked her a few questions about the song.
Alright-alright I found it on another blog but here it is anyway. I'm probably not supposed to post it in full so I've cut some boring parts out. The interview was originally posted on Seattle PI Reader Blogs and you can read the interview in full here (and it contains links which I haven't bothered to copy). Thanks to Seattle PI Reader Blogs for letting me post it here (which I'm sure they would have if I'd asked them).

PS: And interesting to learn that the chick is actually a Ray Bradbury fan and has been so for many years, it's not just for the video.

Last Sunday, August 15, 2010, novelist Ray Bradbury received a very special advance birthday gift in celebration of his 90th birthday on August 22, 2010, that the whole world was invited to share.

Fuck Me, Ray Bradbury, a video valentine/birthday card by Rachel Bloom has since been viewed 441,407 times on YouTube.

Once upon a time the novel stood at the pinnacle of culture and novelists were idolized. That time has, alas, passed, so it's good to see a little old fashioned hero-worship by a very sincere fan who has brought novelist-worship into the 21st century with a video camera, wit, and a wink.

It's a tender testimonial, in the tradition of Judy Garland's love letter in song, You Made Me Love You, to Clark Gable on the occasion of his birthday in 1937 - with sex and grrrl power!

Booktryst: Tell us a little about yourself.

RB: I'm twenty-three, and a student at Tisch School of the Arts at NYU.

How long have you been a Ray Bradbury fan?

I've been a Ray Bradbury since I was about 14.

What's your favorite book by Ray?

Do you collect books by Ray?

I do collect his books, especially now, since I had to buy all the books for the music video!

Any other favorite authors?


Other favorite authors I have intensity for...probably no one as dear to my heart, but I'm a huge fan of Philip Roth, Kurt Vonnegut, J.K. Rowling (huuge Harry Potter fanatic) and all comedy books by George Carlin (which were based on his standup). Also, I'm a big fan of Bryan K. Vaughan.

What's your boyfriend's reaction to the video?

My boyfriend, bless his heart, is so proud of me. His name is Dan Gregor, and he's a writer for "How I Met Your Mother," as well as a member of the sketch comedy group ChubbySkinnyKids . The Britney Spears parody-angle to the video was an idea that partially came from him, and he encouraged me to dress accordingly. After all, I'm not showing my boobs/saying dirty things for sluttiness' sake- I'm doing it because it fits in with the comedic intention of the piece. At the end of the day, this song and every other comedy song I will continue to write is a musical comedy sketch.

Was this a project for school?

This was a private venture. I came across this song on an old word document on my comp, and I was like "Oh. I should record this and make a music video." I produced this whole thing pretty much on my own. I think being an only child really helped me with stuff like this. 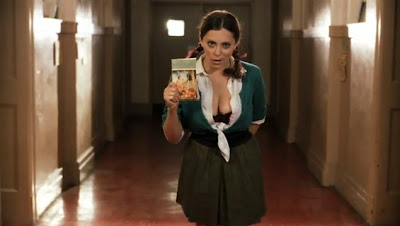 My budget was the budget that a recent college grad could barely afford.

What is it about Ray that you find so attractive?

First of all, the number one thing I am earnestly attracted to is intelligence. Writers are thus the pinnacle of intelligence. While actors are great and awesome, writers literally create new worlds from scratch. What is sexier than that? Personally, I don't know why every person out there isn't dating a writer.

If you had a chance to meet Ray, what would you say to him?

If I were to meet Ray Bradbury, I would say very earnestly that I am overwhelmed with how well he combines such mind blowingly cool ideas with the realism of how humans deal with these ideas. That's what struck me especially about Martian Chronicles or The Illustrated Man...I found myself as emotionally engaged as I was mentally. If I really met him, I would be nothing but respectful and probably like the 12 year old boy I secretly am inside.

What do you hope Ray's reaction will be?

I just heard through the grapevine that Ray Bradbury saw the video and loved it.

Does this relationship have a future?

I think it safe to presume that rarely, if ever, has a ninety-year old man been the object of a 23-year old coed's literary libido. This may add another ten years to Ray's lifespan. Or shorten it. What a way to go.

10:31AM Update: Rare bookseller James Pepper, a friend of Ray's, reports this morning that "Ray has not seen it yet, but tomorrow the Mayor and the city council are declaring Ray Bradbury week at city hall. Ray is going to be shown the video after that event at his house by my friend John Tarpinian who is accompanying Ray downtown. So hopefully we will know his reaction late tomorrow."

12:48PM Update: It has been reported to me that Ray Bradbury has watched the video twice and liked it. 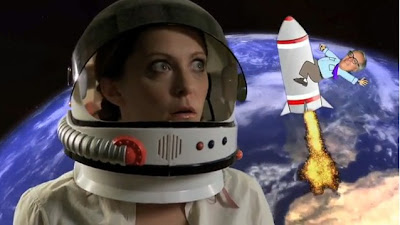 Houston, we have a throblem!


...and someone on the Internet posted this photo of Ray finally watching the "Fuck Me, Ray Bradbury" video. 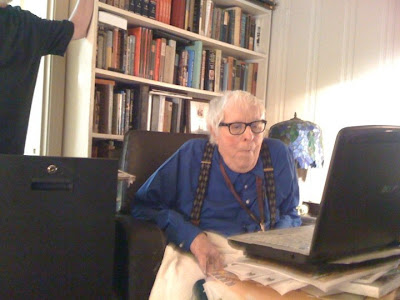 When Robert Redford comes to you in your dreams

I woke up and wrote down one of my messed up dreams again. I choose not to regard them as anything but fragments of a mutated insane brain. Otherwise I'd probably believe the back of my mind is trying to tell me I'm gay ["Not that there's anything wrong with being gay", Seinfeld] (the last dream I remembered was about Fred Anderson and now Robert Redford for Christ's sakes!). Damn brain, I thought we had an agreement!

I found myself on a connecting street close to the neighbourhood where I grew up. There was a shopping cart (which later changed into a fridge) half blocking the road so I put it into a big fridge (which changed into a big wooden cupboard). The maintenance guy came by and it was his job to do this but since he hadn't done it I got impatient and moved the trolley. I discovered I had my dick hanging out my pants and didn't want him to see it so I walked away from him slowly towards my little backpack. I got my schlong tugged in, got my backpack, and started walking towards a big hill which is located close to that road. However, in my dream it was much bigger and had a hotel on top. I wanted to go there cos I knew it was owned by my friend Robert Redford. I got to the asphalt padded yard in front of the main entrance. A couple of girls were sitting next to a table a bit of way away and I dragged my backpack, which had now changed into a plastic bag, on the ground to show them I REALLY didn't care. I got in thru the door and went into a lift to go to the top floor. The inside of the lift looked weird, the staff had tried to make it safer by applying odd paddings to it. I got to the top floor and I walked out and the same did a group of other people from the lift. They hadn't been there when the lift went up. There was a party going but being my cool self I didn't want to rush ahead like the dorks in the group. And besides, I wasn't wearing a suit like they were (not that I ever wore a suit) so I waited for a moment. A mid-aged rich woman asked me if I wanted to come around for sex at an agreed time. I said "Yes, write down the time" and gave her a pen. The paper was in my plastic bag which for some reason was now on top of a bookshelf. Being a rich woman she didn't know how to reach for the paper so she looked around for a servant. I reached up, gave her the paper but then I saw my friend Robert Redford. He was sort of keeping to himself and leaning towards a wall. I went over and we talked briefly, he knew I wasn't one of the rest of these people, vultures who were just interested in his fame. The mid-aged woman who wanted to fuck me came over, she had now changed into a pretty young girl and she looked shaggable but when Redford begun to speak to me again I thought "fuck it" (because I'd probably get another chance with her later) and turned my back to her. Then Redford said "Have you done your Cleese?" To which I replied "No, not yet". I knew what he was referring to and at this stage I remembered I'd dreamt about this before. Maybe weeks ago or maybe even months had passed in between but in a previous dream I'd been at this place before where I'd played a hiding game with Robert Redford. A dream in which I'd done John Cleese's famous long-legged "walk" (the one you see in the "Faulty Towers" episode about the Germans where he imitates the Nazi walk). So we started the game again, Redford hid in a small cupboard and I simply went for the lift again. The pretty girl was confused and went to his hiding place, opened the door and asked if he'd seen me. He yelled "Jack, have you done the 'walk'" So I stuck my head out and yelled "No", pressed the button on the wall, the elevator began going down again... and I woke up.

At some stage in the dream I'd heard a loud noise and now I discovered that a pile of video tapes close to my bed had fallen over (and crushed some of the little people who I suspect live on my floor).