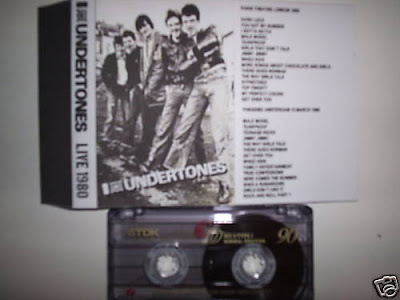 I received this brilliant live cassette by THE UNDERTONES. It's entitled "Live 1980" and needless to say it's a bootleg tape. Some of you youngsters might not even know about this but in the old days there were no CD's, CD-r's, or even computers. All we had was cassette tapes! That's right; no dvd's, cd's, widescreen tv's, or even postal service. And we had no electricity in the houses. Anyhoo, I won this old rare live tape on eBay. In the description the seller said: "New inlay Card has been made - original lost or damaged", haha. Obviously I smelled a rat right away but I still placed a bid cos I wanted the recording. Now I've got the tape (which I won for very little) and sure enough; the tape is brand new and the ink on the inlay card is so fresh you can still smell it. LOL. Anyway, it's a way cool recording; there's really nothing that beats Fergal Sharkey when he rips into Teenage Kicks. The track has been covered by countless of bands (just try and make a YouTube search!) but NONE of them are worthy of washing the original version's underwear! Sorry, but the Green Day version might as well have been sung by a couple of sheep, that's how lame it is. The two live sets on the cassette were recorded in Amsterdam and London (1980) for radio broadcast.