Thanks to Andras for posting this on Cinehound.

NB: I don't know if the title in Chinese characters read Gong Tau but this clearly isn't the English language title as GONG TAU is a different film by Herman Yau (and also the Chinese title for BLACK MAGIC). The title of this film is FURY OF THE HEAVEN and I just discovered I have it on one of my shelves!! I HAVE TOO MANY VIDEOS!!! Haha (no not really). Anyway, check out the clip, it's pretty WILD!!!
Posted by Jack J at 12:06 PM 1 comment:

Labels: a: dark hong kong, Fury of the heaven 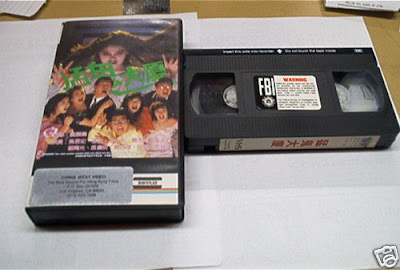 I just won these two video tapes on eBay. The seller was an unlikely seller as it was a record store in the US that doesn't normally deal in HK video tapes so I guess that's why I'm happy to be able to report I was the only bidder! Yay!

The scan on top of this post is OPERATION PINK SQUAD 2 which is a film I remember from the old splatter fanzine days. It was one of the films that tape traders would swap as it was one of those crazy, wild and right out over-the-top horror flicks that splatter movie fans had just discovered at the time. Forget the first one, forget the (kind of) third one. This second entry to the series is where it's at!!
And needless to say I'm pretty stoked about getting this one!! I mean, it's on DVD and all but... you know... this is the original tape that you just couldn't buy in the old days!! It's pretty awesome!!!


Here's what Thomas Weisser said about it way back in the special "cinemasian" edition of the US fanzine Naked! Screaming! Terror! #4/5 (back when he had just discovered these wild films and he was still an entusiastic fan):

"The original OPERATION PINK SQUAD was a winner action/adventure film that featured beautiful girls with machine guns similar to the ANGEL series. This time, director Jeff Lau takes the girls, puts them into a horror motif and adds a touch of humor. The result is a remarkable excursion into the outlandishly bizarre. Especially enthralling is an awesome villainess who has the power to disjoin her head from her body. As her body continues to chase The Pink Squad through the corridors of the haunted castle, her head zooms at breakneck (pardon the pun) speed chomping, biting and nipping at everything in its path. The Squad then uses miniature helicopters to chase it and (in scenes reminiscent of the "ball" in PHANTASM) the copters eventually surround the head; however she chooses to self-destruct in an amazing explosion of blood and gore. And the FX are so good that one almost believes it all. There's lots more, including legions of "Living Dead-type" zombies and four Kung Fu mystics who arrive through a "door to heaven." These priests, armed only "with the power of musical instruments," go into battle against the creatures and (like an MTV video) kill them with music. This film is a must see extravaganza."

Thomas Weisser gave the film top marks of four stars. When he later reprinted the review in his Asian Cult Cinema book his enthusiasm had cooled off quite a bit as he lowered the marks to these wild horror films from what he had originally given them back in N!S!T! In the book OPERATION PINK SQUAD 2 only gets three stars and he omitted the line "This film is a must see extravaganza".

Unfortunately, I have a feeling he had "grown up" and somehow couldn't enjoy wild and crazy Hong Kong films anymore. I guess Japanese spanking films became what gave him his kicks (plus made up spaghetti westerns that never got made, LOL). Don't get me wrong, I love all his enthusiastic reviews and ramblings from the early years. I love them a lot actually. That issue of N!S!T! became like a bible to me and Weisser's and Timothy Paxton's ramblings were partly what got me off on a never ending trek for Hong Kong cinema's wildness and weirdness, a trek that lasts to this day. And for that I thank them wholeheartedly! (anybody know what became of Paxton and Dave Tordarello???).

The other tape I won is ENCOUNTER OF THE SPOOKY KIND 2. Yes, that one!! The sequel to ENCOUNTER OF THE SPOOKY KIND (aka Close Encounter of the Spooky Kind/Spooky Encounters) which has yet to be released subtitled to English on DVD (there's a beautiful French DVD but sans the English subs. Oh, and I have a very cool DVD-r of this version with added subs thanks to one very nice Cinehound member, Mr. White in the UK! xD!!!). 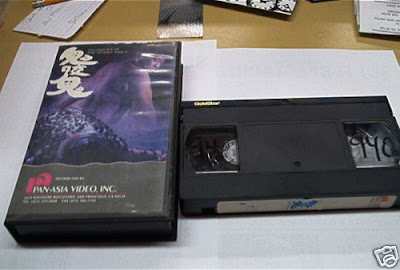