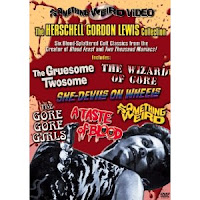 I've watched a few of H.G. Lewis' films in the past (and reviewed some of them for STAY SICK! magazine) but the ones I have in my collection are all on VHS (my first H.G.L. film was THE GORE GORE GIRLS on bootleg in Melbourne in the early/mid 90s!). So I thought it was finally time to GET THE LOT and ordered the Something Weird Video box sets THE HERSCHELL GORDON LEWIS COLLECTION (6 films) and the H.G. LEWIS BLOOD TRILOGY (I forget how many films are in that one, haha).

I thought I'd watch them all in chronological order except for the ones I've already watched on VHS (which I'll watch at the end) so today I began with COLOR ME BLOOD RED from 1965 (the third film of the lot). Gee wauw!! It was awesome and I already wanna watch it again. 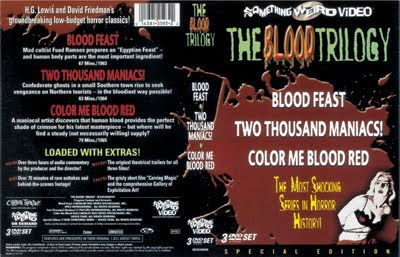 The ting is I read a review of it in a UK fanzine almost 20 yrs ago and the reviewer said something to the effect that apart from the gore scenes he thought it was rather dull (and he kept miswriting the title as "Colour Me Blood Red", I mean how hard can it be to write "color"!! >_< ). Well, I was part of that whole splatter fan underground scene back then but if there's one thing that annoys me when I look back upon that time it's how some spatter fans could not for the life of them look beyond the gore!!! No gore meant a film was practically worthless. Even without the FUN splatter scenes of COLOR ME the film is great!! The plot is fun, the characters/actors are fun, the music is cool, and the COLOURS OF THE FILM, MAN, OH THOSE KITSCHY COLOURS!!!!! 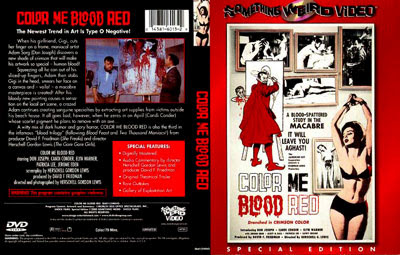 I could watch this film again for the colours alone (and I'm not referring to the red colour of the title). I watched the film twice as it also has a FUN AND COOL commentary track from Mike Vraney (you know, from SWV), H.G. Lewis, David Friedman, and some other guy. The entire 80 minute audio track is highly enjoyable but the one moment that stands out is when you get the real low-down on what the beef between Lewis and Friedman was all about (thee BEEF that meant they split up both professionally and as friends, and went separate ways!). COLOR ME BLOOD RED is highly recommended to anyone (not just gore film fans) who's into cool and alternative low-budget films. 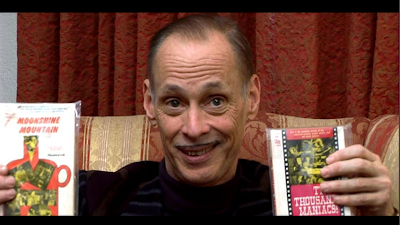 John Waters with a couple of other Lewis titles.
Posted by Jack J at 4:44 AM 4 comments: