For Your Height Only sequel - VHS 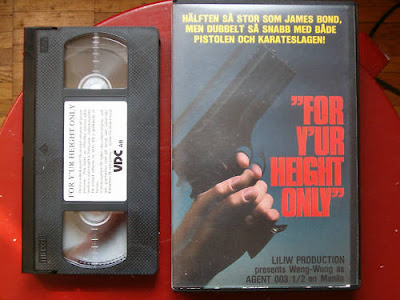 Ahhh, check this out: I won the uber very mega totally rare Swedish VHS release of THE IMPOSSIBLE KID on eBay. The film is the sequel to FOR Y'UR HEIGHT ONLY (on Mondo Macabro DVD as For Your Height Only) starring Weng Weng!!! This film isn't out on proper dvd anywhere but only included in one of those 50 Films packs and I believe it's a "Public Domain" release in the US (which anywhere else would be called an illegal bootleg). However, I think this is the only video release of the film. If there are any other I'm not aware of them.

Oh, and don't ask!! I have absolutely NO idea as to why the Swedish company re-titled the film with the FIRST film's title!! O_O
In the words of Johnnie Cochran (i.e. the South Park version of him anyway): it does not make sense!!!!!

Oh, and if winning the tape wasn't awesome enough it seems nobody else discovered the auction cos I got it for a mere $15.50 bid! Yay!! Spiffy!!!

This is a great laid back rendition of the old Johnny Cash track "Ghost Riders in the Sky" but I can't decide whether I think the video is fake or not! o_O The track is by the King, and the footage is of Elvis but is it spliced together using footage where Elvis did other tracks or is he really singing "Ghost Riders"??? You hardly see his lips follow the lyrics. Hmm.
Posted by Jack J at 3:01 AM 3 comments: 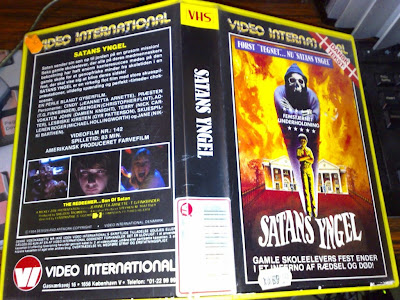 I watched THE REDEEMER (released as "Satan's Breed" on Danish VHS) the other day and it was certainly better than what some of the reviews I've read suggested. Unfortunately I have never been able to find this RARE Danish ex-rental but I got a nice dvd-r from Fred Adelman (thanks buddy!) sourced from an uncut US VHS. Jens Thomsen of Uncut forum tells me it's gonna get a reg. 1 DVD release soon so that's cool. Apparently it'll be a version spliced together using no less than five versions! O_O

Check a couple of old radio spots for the film here.