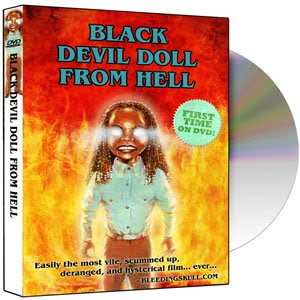 My eyes are deceiving me! This can't be real!! The damn green rays from the TV set have finally mushroomed my brain cells!!!

Chester Turner's shot on VHS amateur horror films BLACK DEVIL DOLL FROM HELL and TALES FROM THE QUADEAD ZONE from 1984/87 are getting a fucken DVD release!!!!! How... what... I mean... HUH???

Haha, Jesus fucken Christ! These two films are the weirdest of the weird. I would never have put my money, or anybody's money, on their getting an official DVD release. Like, ever!

If you have no idea what these films are go to BLEEDING SKULL (my fave web site!) and read Joseph A. Ziemba's awesome reviews for BLACK DEVIL here and one for QUADEAD ZONE here. We can talk when you come back.

Breathe easy, friend! It’s Black Devil Doll From Hell, the early shot on video (SOV) blaxploitation cesspool from mysterious auteur Chester Turner. Easily the most vile, scummed up, deranged, and hysterical film to ever be scored with a Casiotone CT-310, Black Devil Doll’s flamboyance cannot be overstated. Forget the tug between “good” and “bad” filmmaking; there’s nothing else like this anywhere on the planet. And there never will be again. In some far off bizarro world, Dave Chappelle and John Waters got together over lunch, shot the shit, and left with a napkin-scrawled script. One camcorder later and...well, you do the math.

There isn't much to tell you about Chester Turner. Or maybe there is but whatever little bits and pieces of half forgotten info there might have been has mysteriously disappeared in the mist of whatever alternative universe Chester came from. He made BLACK DEVIL DOLL FROM HELL in 1984. He shot it on video and the budget was (most likely) around 50 bucks which (probably) went to chow and bus fares.

Then he waited three years and made TALES FROM THE QUADEAD ZONE using the same lead actress. Then... nothing. Chester Turner disappeared. No news. Nothing.

Many years later the two Lewis brothers, Shawn & Jonathan Lewis directed a new film about a black devil doll simply entitled BLACK DEVIL DOLL. It's not a remake of Turner's film but the inspiration is there. Well, at least for the title. On Dvdmaniacs Shawn Lewis talked about how they tried to buy the copyrights for Turner's film so they could include it as extra material with their own film on DVD. They got in contact with someone on MySpace who claimed to be Chester Turner. They paid him big bucks only to find out he was a con artist. And they got in contact with Chester's family only to discover he had actually died in a car crash back in 1994 or '95. The mystery of Chester Turner remains. Maybe it's better this way.

I have both films on bootleg DVD (from the place doctor Ziemba linked to on BLEEDING SKULL) and they are fine (probably look every way as good as the original - very very very rare - tapes ever did) but I still can't wait to get this DVD. xD. Neither should you.

The release date is set for October the 26th. Official web site here.

As you can see, rules of language, structure, and general awareness have no business in the Quadead Zone. It's a tight package of non-stop, fantasmo delirium. People speak in tongues that escape the radar of historical linguists. Chester Turner's homemade score (some of which is recycled from Black Devil Doll, but re-recorded) drowns out everything at all times. Hilarity forces you to pause for breath (Ted and Fred's jive talk sessions) before pummeling you with disturbing grit-gore (Daryl Vs. Shirley). Surprises hide beneath every plastic covered couch and dirt floor basement. And then, before you realize it, Quadead walks the plank...and lives.

PS: After having finished this piece I suddenly discover that I'm not the only one who seems to have a preference to BLEEDING SKULL. Check the top scan, they've actually quoted the very review I linked to!!! 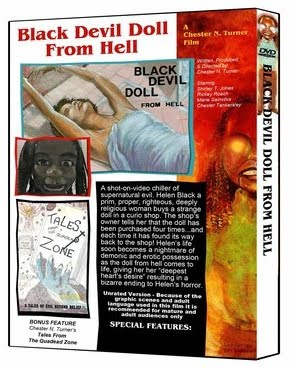