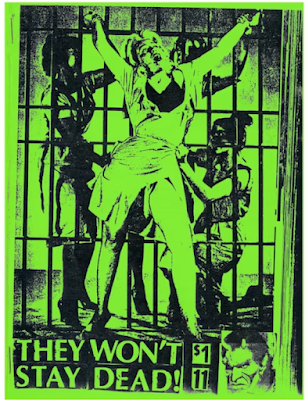 I just discovered an old 80s horror flick zine called They Won't Stay Dead on ZineWiki. It says the publisher, Brian Johnson, sadly passed away 20 years ago. I did a google search and found two copies for sale online. One from a webshop; they're selling a copy of the print zine. But the other copy is some guy on etsy who's selling a pdf of the zine at £5!!!
Selling second hand copies of an original fanzine, fine. But selling a pdf of your own scan of a zine you didn't even publish!? That's despicable! This should be uploaded to Archive,org for free, not sold at five quid!
Posted by Jack J at 9:46 PM No comments:

A couple of minutes from this interview have been on YouTube for years, but I just noticed that Sharon Tate's sister, Debra Tate, has uploaded the full interview to her YouTube channel!
She has also uploaded a couple of other segments from the same edition of the show in which we see Sharon and her then husband, Roman Polanski. Debra Tate's channel is full of videos about or related to Sharon. It's not mentioned but I'm guessing she must about bought a copy of the full show.
The listed date is 2/7/69, but I assume since she's American she's writing it the "wrong" way, hence it's actually 7/2/69 to the rest of us (i.e. 7th of February, 1969).
Posted by Jack J at 5:43 PM No comments: