MUHAHAHA!!!
I finally succeeded in winning a copy of BLOODY VENGEANCE!!! Faaantastic! This is the Barry Prima revenge flick that fans of Indonesian films who are cool and namedrop Mondo Macabro titles don't know dick about, haha. THERE IS NO DVD RELEASE! It's only out on old-school vhs in Greece and might I ad a very scarce vhs release! I've lost it once before and have actually bought a bootleg dvd cos I never thought I'd ever manage to find it again (let alone win it)... but here it is!!! (well, actually it's still with the seller, LOL). 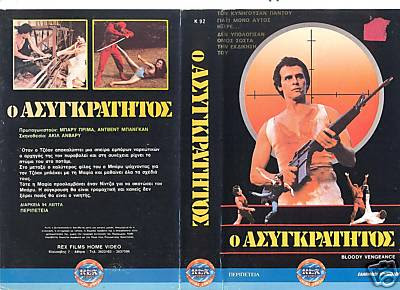 I just found this credit sequence + intro scene from the Taiwan movie IMPOSSIBLE WOMAN (aka The Ninja Avenger / Ninja Apocalypse) from 1983. Check it out, it's pretty awesome. If the rest of the flick is just as good I'm definitely sold!!

It stars Elsa Yeung who's been in tons of movies, not least GOLDEN QUEENS COMMANDO and its sequel PINK FORCE COMMANDO (and Bruce, Kung Fu Girls which I just saw).
More credit info here.

Ahh, what I didn't tell you in the above is that I initially checked out IMPOSSIBLE WOMAN on YouTube because Bill Barounis had the Greek VHS up for auction on eBay but obviously I didn't wanna turn everybody's attention to the auction since I SO did not want any competition, haha. And yesterday (almost without any competition) I did indeed win the tape, so woo-hoo!!! I haven't been able to find any info on other Mandarin language, English subtitled versions (and yes; it has Greek subs as well) so that makes it even more exciting. There is (I think) a UK vhs but it's dubbed into English. 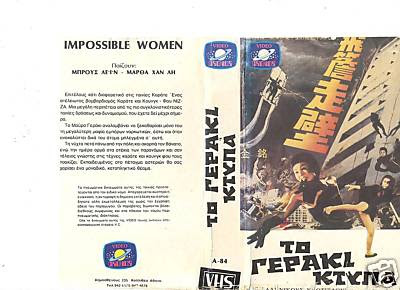 [PS: The back of the Greek cover lists the English title as Impossible Women (plural) but it's a mistake and SHOULD be Impossible Woman]
Posted by Jack J at 12:14 AM 4 comments: