I'm just about to post about a new(ish) cool blu-ray release of one of Cirio H. Santiago's MAD MAX II clone flicks, and it occurs to me that it's been almost four years since I posted about Santiago's most recent post-apocalypse film, WATER WARS. A film which also, unfortunately, became Santiago's last film before he passed away. He didn't even finish the film shoot and Jim Wynorski had to take over directing the remaining part (go here for my old post). 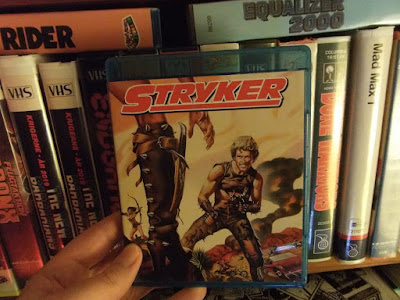 During the three and a half years between then and now we have been blessed with a good number of blu-ray releases of cool Cirio H. Santiago US/Filipino coproductions filmed in the Philippines. Code Red have put out a handful of these films (cheers, Bill Olsen, you madman!) but the film I'm posting about here is from the good people at Kino Lorber (USA). STRYKER from 1983.

MAD MAX came out in 1979 but it's not really a post-apocalypse film, and it wasn't until 1981 that the genre took off as we know it thanks to MAD MAX II (which the American distributor retitled "The Road Warrior" to hide that it was a sequel to a film released by another label). When the Italians saw how popular MM II became they were quick to jump on the bandwagon and put out their own "MAD MAX" films (plural!) in 1982. And over in the Philippines Cirio H. Santiago thought, "Hey, I can do that!" and so in 1983 he made STRYKER! And just like the Italians made not just one clone but a whole series of MAD MAX clones, Santiago followed STRYKER with no less than six Filipino MAD MAX clones (knock-offs, rip-offs, call 'em what you want); RAIDERS OF THE SUN, DUNE WARRIORS, WHEELS OF FIRE, THE SISTERHOOD, EQUALIZER 2000 and WATER WARS (working title: "Road Raiders").

EDIT: I forgot one of Cirio H. Santiago's post-apocalypse films; He didn't do six other films but seven!! (eight in total). The last one is FUTURE HUNTERS. I urge you to read Andrew Leavold's incisive and info filled review here.


PLOT: We're in the wasteland. A narrator (in an Aussie accent, of course) informs us about the end of the world as we know it. Or rather knew it. It went into the toilet long ago and now the most precious thing is petrol, uh, I mean water!

When the film kicks off a gang of lowlifes are chasing after a young woman in the sand dunes - where she kinda lives (?). They want her ... water! She's then rescued by two good guys which both just happened to drive past. One of the guys is our main character and hero, Stryker, played by Steve Sandor. Sandor was once a bad guy in the cool exploitation flick BONNIE'S KIDS (1972) and he was also in heaps of psychotronic stuff on TV. Very odd to think of when you watch STRYKER; The thing is Sandor has the charisma and facial expressions of a tree log.

I'm not going to bother going into more detail of the plot line. Santiago wrote it on the back of a half burnt matchbox and I've already said more than what was on said box of matches. There are some bad guys, some good guys, there are some sexy amazons (their leader was a playboy centrefold), they drive around, they fight, they take revenge, and they all wear Mad Max style clothes. And  Stryker is a loner. If you're familiar with Filipino cinema it won't surprise you when you see scenes of 20-25 dwarfs popping up out of the dunes to attack people. Those dwarfs were in so many films I've lost count. According to Andrew Leavold a lot of them worked at the same "dwarf restaurant" between making films. I'm not kidding you!

The film is probably made on the same budget that MAD MAX II spent on catering. On one day's worth of catering mind you. But kudos to Cirio and his inventive crew who made the cars, motorbikes, and other futuristic vehicles look so bloody cool.

I quite like STRYKER. It's a fun film. Some of the dialogue is slow and there's a couple of romantic scenes that are so schmaltzy you feel like you're gonna lose your lunch. Hahaha.


THE BLU-RAY
If I wanted to watch the film before I got this new spiffy blu-ray release from Kino Lorber I had to dig out my old VHS tape from Greece. Worn, fullscreen and big Greek subtitles that cover a third of the screen. This new blu-ray (from 2017) is certainly a most welcome release (they also put out a dvd release). Unfortunately, in contradiction to say Code Red, Kino Lorber didn't bother to mention what source was used for the blu-ray. Was it a film negative, a 35mm print, a betamaster, or what? But in any case the print looks good. Slightly worn and the colours are kind of faint. But that's alright, it suits the film. There are a handful of trailers (for Santiago's other post-apocalypse films) and a commentary track by Jim Wynorski. The film has optional English subs. That's it!

Go here for a smashing interview Andrew Leavold did with Cirio H. Santiago in 2007.
Posted by Jack J at 6:48 PM No comments: