THE BATMAN VS. DRACULA is a feature length catoon film made for television. I haven't watched the Batman cartoons since sometime in the early 90s when they ran on German tv (not that I ever lived in Germany mind you but via satellite tv). I feared this Batman take on the vampire story might be too, ahm, cartoonish but I think it's done quite well. And the darkness that Frank Miller introduced in the magazine is kept pretty good.

The plot: the ultimate insane inmate (guess who) from Arkham Asylum escapes and tries to find a hidden loot from some robbery. Another Arkham inmate (one Mr Oswald Cobblepot. LOL) follow suit, also to try and find the loot which is hidden somewhere at the Gotham cemetery. Obviously they find the wrong grave.

The film grabbed my attention all the way thru and altho you know the Bat man is probably going to make it to the end the road to there is uneven enough to make you wonder how it's all gonna end. The soundtrack is good and like I said I like that they are sticking to the dark style. Was it scary? Well, seasoned horror fans are not easily scared so no - but I certainly don't think THE BATMAN VS. DRACULA is aimed at the wee ones. All in all I enjoyed the movie heaps.

SPOILER: If there's one thing I disliked it was the fact that no one dies; I mean, come on, it's a vampire film for Christ's sakes! Even if it's set in the DC Comics universe. End of Spoiler.

The extras on the DVD consist of short interview bits, a making of the dubbing process which is fun to watch, and finally a handful of trailers. The film is subbed and dubbed in English/French/Spanish. I bought the reg. 1 DVD which, altho I got it from Amazon UK, was four times cheaper than the UK DVD! Go figure. o_O
Posted by Jack J at 5:02 PM No comments: 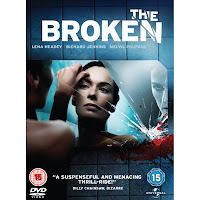 I watched the new (everything after 2000 is *new* to me in the world of horror movies!) British horror movie THE BROKEN the other day. I don't wanna reveal too much about the plot but it's kind of a variation on the old THE BODY SNATCHERS theme. The director, Sean Ellis, wanted a horror movie in the vain of the old films that didn't rely on gore or full blown monster makeup and I must say he did a great job in that direction (however there is ONE gore scene that's quite awesome. Look out for it!). There's thankfully no lame humour or "cool" one-liners and the actors are all good. It's a co-production with France so the main character's boyfriend obviously had to be from the land of the cooked frogs. LOL. The UK DVD is good altho the extras are pretty lame. Whoever invented the cut-up interview form ought to be tarred and feathered and run out of town! Overall a highly recommended film.