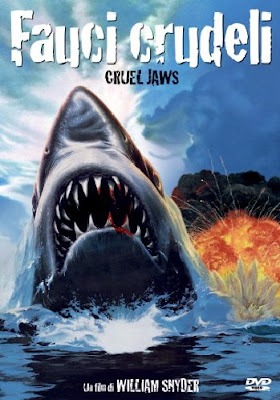 Hey, I've just learnt that Bruno Mattei's CRUEL JAWS (aka Jaws 5: Cruel Jaws) is being released on DVD in Italy on May 21st!!! Wauw, great news for all fans of Mattei's trashy (and crappy) rip-off movies!!

Obviously, a few of us already have this on Japanese video (or bootlegs from that vhs) but now, finally, everyone can get hold of it legit. Well, if you live in Italy or import it that is, LOL. I got this piece of exiting news from Søren Jacobsen's Danish horror movie blog "Skræk og rædsel" and thanks indeed for that update there, Søren! Oh, and not least important: the DVD WILL contain both the Italian and English audio tracks. Woo-hoo!!!

I'm sure this is preaching to the already converted but let me just briefly explain what CRUEL JAWS is (I'm 100% sure this in completely unnecessary, I mean who in their right mind would read this blog if they werent't into trashy movies anyway, haha).

And the film is a rip-off in all meanings of the word. It's obviously ripping JAWS off, and it's ripping the viewer off for trying to be something it's so clearly not. And not least, it is even fucking ripping off OTHER Italian JAWS rip-off films!!! Hahaha. However, if you're new to all this you may expect me to put down CRUEL JAWS and ridicule it. No way, José! Fuck no. I may laugh WITH my Italian (and Indian, Turkish, Filipino, etc) rip-off and trash films, but I most certainly DON'T laugh AT them! I love them too much to do that. I let crappy online reviews do that. Reviewers who know practically nothing about the movies they review. Or the genres they belong to. Unfortunately the local online review sites are FULL of that kind of reviewers. I keep thinking where the fuck do they come from?? It's like they're fucking breeding, haha. Well, this here blog be the alternative!! LOL. 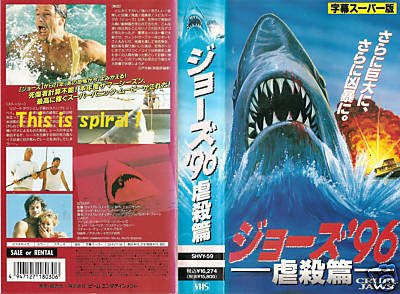 Go and get CRUEL JAWS right away when it comes out! I'm your cult leader and that's a direct order! And get me some lemonade. It's trashy cinema but that's not saying it isn't entertaining... because it is!! 100% No, 200%!!! Is it a good film? No. Not by anybody's standards. But is it entertaining? Does it deliver? HELL YES!! I really do hope this isn't a wild goose or that it'll get cancelled before it hits the streets because this is indeed a film trash film fans (myself included) have waited for a long time.

All hail that video company in Italy! And don't hold your breath while you're waiting for a Reg. 1 release. Read my lips, paesano: It's ain't gonna happen!!! Steven Spielberg had them ban THE LAST SHARK (aka The Last Jaws) forever in the US and there's no chance in Hell CRUEL JAWS is ever gonna come out on legit dvd in the US.


NB: If you look up CRUEL JAWS on various crappy sites (including IMDb) it'll tell you that the film was made for TV. This is SO NOT TRUE! It was made for cinema distribution and was shot on real film! The problem was that when the producers tried to sell it for distribution back in the day nobody wanted to buy it and so it only had a very limited cinema run. I guess it later turned up on late night tv in some areas and as I mentioned earlier it was released on vhs in Japan. 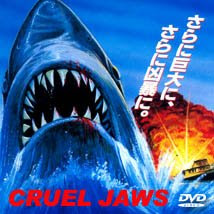 [DVD-R/Greece/bootleg off the Japanese vhs]
Posted by Jack J at 3:29 PM 2 comments:

Alright, let's add some coolness to this here place...