I posted about how I'd bought the then new bluray release of SATAN'S CHILDREN (Joe Wiezycki, USA, 1975) back in 2020 (check my old post here). The bluray was a co-release from AGFA and Something Weird Video. SWV had already released the film on video and a couple of times on dvd (as a double bill with ASYLUM OF SATAN - for a review of the dvd go here), and knowing SWV they probably also sold it on dvd-r [EDIT: I checked and yes they did!] And now they've just re-released it AGAIN! Cash cow much!? Why not just keep the old bluray in print!? The old release is a double bill with Ray Laurent's documentary film SATANIS: THE DEVIL'S MASS (1970). The new re-release has a few new bonus features, however, it omits SATANIS!

I assume they have used the "old" (from three years ago) scan of SATAN'S CHILDREN as nothing has been mentioned otherwise. The new bonus features are a Q&A and a commentary track - the latter by somebody called Elizabeth Purchell. You also get the old SWV documentary THE WEIRD WORLD OF WEIRD (1970) off an S-VHS master (the info about the new re-release is lifted from SWV's website).

WEIRD WORLD is already on YouTube in full, and since it's off a VHS tape anyway I don't reckon it'll be in any better quality than the 480p version on YouTube. So in other words what you get of (real) new bonuses instead of SATANIS are a Q&A and a commentary track. If I didn't have the "old" bluray and were to choose one I'd still go for the older release.

I love Something Weird Video, and not least do I love the history and background of the label. But I'm not always in favour of their decisions; Like their choice to stop selling physical media to countries outside of North America! Or the fact that they refuse to include a cover scan if you buy a downloaded version of one of their films.

And now we get a new re-release of an already new release with a couple of new extra bonus features thrown in to make the fans buy it again!

I'm aware that a couple of fans on facebook have suggested that the reason for the omission of SATANIS is likely due to copyright issues. But fans speculating about something clearly isn't equal to stating a fact. I still have to see any official word on this from either AGFA or SWV. If it were just a matter of their not being able to include the film, how come they don't just come out and say so? Could it be that it's not just a case of copyrights, but that they're going to re-release SATANIS on a stand alone disc as well?

Oh well, time will tell I'm sure. And even if it does come out again (which means the "true" fans will buy it again - I'm confident it'll feature a new interview or a PDF of the Satanic Bible or some such, LOL) I don't need it. Already got it!

Alright, down below you find the full THE WEIRD WORLD OF WEIRD doc from YouTube, a couple of cover pix, and Fred Adelman's review from Crit Con. Even though his site is gone you can find it all on Wayback Machine (I think it's all there anyway).

SATAN'S CHILDREN reviewed by the late Fred Adelman on Critical Condition (original review here):
SATAN’S CHILDREN (1974) - This obscure lensed-in-Florida rarity is a true exploitation maven’s dream. Poor Bobby Douglas (Stephen White) runs away from home after putting up with his abusive father (Eldon Mecham) and cockteasing stepsister Janis (Joyce Molloy) one too many times. He is then promptly raped by four men in the back of a car and dumped unconscious naked in the woods. He is found by a cult of Satan worshippers and brought back to their compound. Sherry (Kathleen Archer), the temporary leader of the group (their leader, Simon, is away on business), falls in love with Bobby who is laid up in b

ed nursing a sore ass. Dissention erupts in the group over Bobby ("He’s queer. Satan doesn’t want victims") and Sherry hangs three of the disciples for wanting Bobby ousted from the compound. The dashing, debonnaire Simon (Robert C. Ray II in an excellent performance) returns and, finding out what Sherry has done, buries her up to her neck and pours maple syrup over her head. While waiting for the ants to come, Simon gives Bobby two choices: He can stay in bed and watch the ants devour Sherry or he can get out of bed and quit being a victim. Bobby opts for the latter. He escapes from the compound and returns home (after electrocuting two compound guards and drowning two more guards in quicksand). He hits his father over the head with a bottle, ties up his stepsister (rape is implied) and throws her in the backseat of his car. He then drives to the house of the four men who raped him and kills them with a shotgun. He cuts off the head of the lead rapist, puts it in a plastic bag (he may have done the same thing to his father since there are two heads in the bag) and delivers it, along with his stepsister, to Simon. The final scene shows Bobby and Sherry making passionate love intercut with scenes of his stepsister being crucified (with metal spikes!) on a wooden cross. A true happy ending! This mind-blowing flick must be seen to be disbelieved. The screenwriters (Gary Garrett and Ron Levitt) are definitely pro-Satan and anti-homosexual. All gay characters are portrayed as sexual deviates and meet nasty ends. When a female disciple swears before Simon and Satan that she is not a lesbian (she is), a river of blood flows from her mouth and she chokes to death! This demented film, directed and produced by Joe Wiezycki (has he done anything else?) is so steeped in homosexual undertones (Bobby is either naked or in his underwear for most of the film) that one gets the feeling that the filmmakers were trying to exorcise some demons of their own. Toss in some good music (the opening and closing theme is a killer) and decent acting (only the father is wooden) making SATAN’S CHILDREN a thoroughly watchable and unforgiving flick, one of the best that came out of Florida during the 70’s. I now declare this to be one of CritCon’s top 20 films of all time! Something Weird Video has dug up a near pristine print of this unknown classic. Do yourself a favor and send $22.00pp off to them and buy this whacked-out tale of Satan-loving homo-hating hippies. You’ll be glad that you did. Rated R for Really Weird. Update: Robert C. Ray II (a.k.a. Simon) emailed CritCon with his take on this film: "The fun thing about that film for me has to be that a significant part of the dialog was badly recorded while filming (the Nagra crystal sync recorder wasn't too good), so we had to re-record the entire thing at my apartment just off-campus from the University of South Florida in Tampa.  The sound man and I went into the bathroom for the better acoustics, and stood in the bathtub and did another series of takes. My young wife was in the kitchen, hidden behind the door, laughing hysterically at us.  All in all, it came out quite well, considering all of us worked for spec.  We all had fun making it, which is ultimately what it's all about anyway..." Mr. Ray II can be seen in the ape adventure/comedy BORN TO BE WILD (1995 - a.k.a. KATIE) playing a corrupt Customs Officer whom Peter Boyle pays off.
Posted by Jack J at 11:15 AM No comments:

THE GORE GAZETTE editor RICK SULLIVAN on the Morton Downey Jr. Show in 1989

Years ago I remember reading about how Rick Sullivan (of The Gore Gazette zine/newsletter) was on a talk show once, but I've never actually watched it. Not until now that is. 45 minutes of 80s crazy American talk show debate about censorship (or as we say in this house: censorshit). This is good fun.

Also on the show: Fangoria editor Anthony Timpone, Michael Berryman, and Dave Juskow who made a film called SPLATTER GIRLS.

Under the radar - Biblio-Curiosa 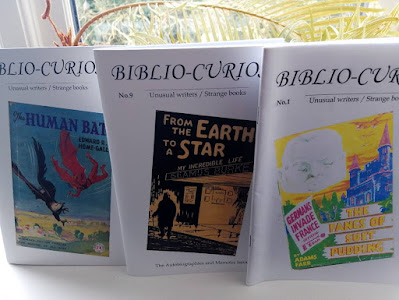 I think the general assumption is that there is no underground any longer as everything is online. But I still discover stuff that fly under the radar. Like this fanzine: Biblio-Curiosa published by a guy in Australia called Chris Mikul. I stumbled over an interview with him, but although he's interviewed online, and although I've found a few reviews of his zine, he has no webpage, no web shop, and no videos on youtube (that I know of anyway). His zine sounds great, though. And as I'm typing this I've just written to him and ordered a couple of issues (despite not having a website or a shop he does have an email address!).
The interview was done by David Kerekes of Headpress fame. You'll find it right here. Headpress has published a couple of books based on Chris Mikul's other zine, Bizarrism (which I haven't seen either). And I think they might have something else he's written - I haven't looked too closely into it yet.
PS: I just got a reply from him. I asked him about his fb account (which I found). He says he logs in about once a year!
Posted by Jack J at 6:41 PM No comments: