When you're BACK AT THE OLD HOUSE in your dreams...

Last night's very vivid dream. I was in the house that I grew up in. My girlfriend that I was with for a decade (and more than a decade ago) was there. My dad was there. I have a faint notion that my mum was there in the early part of the dream leading up to the part that I can actually remember. My dad was in his blue work-clothes that he wore when he would do some work on the house or the garden. Then he went for a drive to get something. I think I said, "Now that they're out of the house you can play some music" and my girlfriend takes off all her clothes and plays some loud music on a stereo (in the dream there's no stereo or radio, the music just kind of comes from the house itself!). She then puts on a jumper and makes a phone-call. She says to her friend Lisa at the other end of the line, "Now I can finally play some loud pop and rock music". I utter, "bullshit!" and I can immediately see it was a mistake so I lower my voice so that the person on the phone can't hear me, and I continue "You can always play pop music". My girlfriend replies, "Oh, okay". I get a feeling it's not quite okay. In my dream I blame myself for the outburst. Then while she's still on the phone standing next to the old desk in the lounge-room, I walk to the other end of the lounge-room and see a dog outside on a dog-leash. I can't see who's at the other end of the leash. In my dream I recognise the dog but now I can't for the life of me remember whose dog it was. Then a moment later I see who's at the other end. It's my dad and he's coming around the house with the dog. In the dream I reckon he wants the dog to meet our own dog (which was my dog really). In the dream I'm thinking our dog will have a fit when it sees the other dog and it'll start barking like crazy. I think about telling my dad not to bring other dogs around because our dog is old and it'll just have a stroke. Then I woke up.

All of it very strange. And all of it gone. As you know my dad passed away in February. My gf from back then is no longer my gf. My dog got diabetes and was put down. We had her for 12 years. Unfortunately, it happened while I was away for 6 months at some school in 1984/85. In my dream the house looked like it did in the old days when my mum was still with us. In reality my dad changed it all after she passed away. The widow after my dad, his second wife, still lives there. I'm not sure what it all means. Probably the Universe saying, "Get your arse in gear and move on, buttmunch!"


For more of the old dreams click the "dreams" label at the bottom of this post.
Posted by Jack J at 3:33 PM No comments: 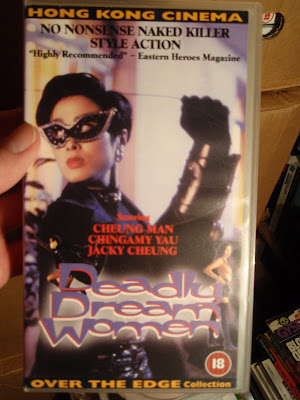 I watched Taylor Wong's DEADLY DREAM WOMAN tonight after having had it collecting dust on my shelf for a couple of years. LOL. My tape is from the EASTERN HEROES label in the UK. On the cover it's retitled DEADLY DREAM WOMEN but the print clearly says "Woman". EH had a knack for changing titles of the films they put out, most notoriously THE LAST BLOOD which became Hard-boiled 2: the last blood, haha (incidentally, DEADLY DREAM WOMAN was produced by Wong Jing who directed THE LAST BLOOD). 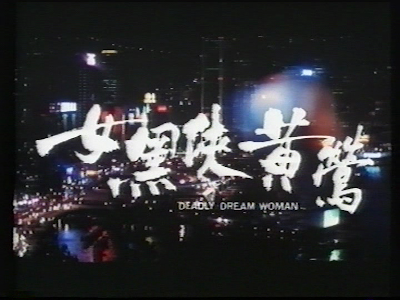 The convoluted plot: A female superhero called Nightingale Wong (played by sexy Cheung Man) gets knocked over the head in a triad shoot-out and loses her memory. She's found drifting at sea by a bunch of prostitutes who save her. She's given a new name and hangs out with the hoes (their "Madam" is also a fake witch!). She starts work as a nightclub hostess with the madam's sexy daughter (played by sexy, very sexy, Chingmy Yau) but instead of spending the night with horny men they simply rip them off. The sexy daughter is engaged to a retard (played by Jacky Cheung) who turns out to be an ex triad boss. Ehh, what? Haha. Later Nightingale recovers her memory and they all go on an awesome gun tooting revenge spree. Death and mayhem follow. 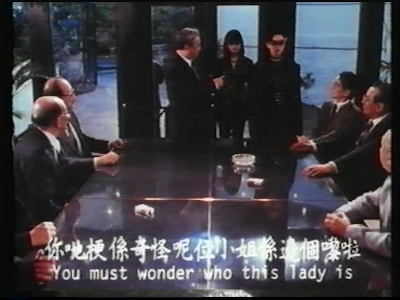 The top bad guy is played brilliantly by Ken Lo who completely steals every scene he's in. At one point he comes out of his house in nothing but a morning gown and a machine gun in each hand and starts blazing away. Smashing! Absolutely brilliant!! In real life Ken Lo was Jackie Chan's bodyguard for 30 years! If you don't like or know how to appreciate Hong Kong humour you're probably gonna be major bored by the 30 minutes that follow the initial 10 minutes of action. Personally, I was well entertained and I'll recommend the film even if you DON'T like HK humour! There's enough awesome action to satisfy fans of 1980s HK action flicks. 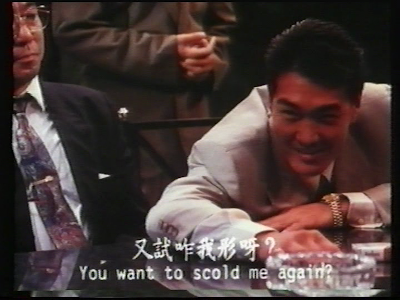 The UK vhs is presented in Cantonese with English and Chinese subtitles. Unfortunately, it's also in fullscreen. There's no dvd release anywhere. The best release (which I sadly don't own) is a laserdisc released somewhere in Asia; it is letterboxed and subbed in English/Chinese, but I'm told there is a HK LD that doesn't have subs so be careful of what you buy if you want subs. There's also an unsubbed HK vcd and a vhs in the US that retitles the film Lady Black Mask. 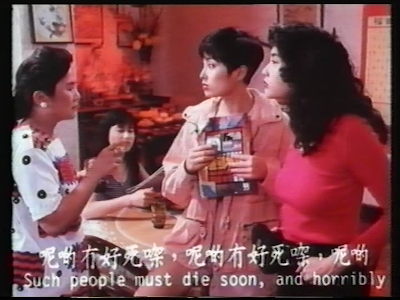 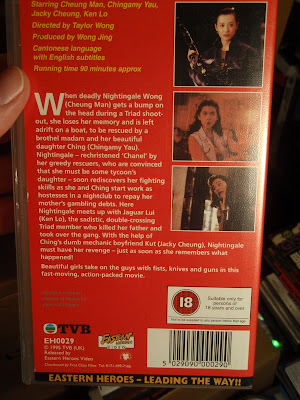 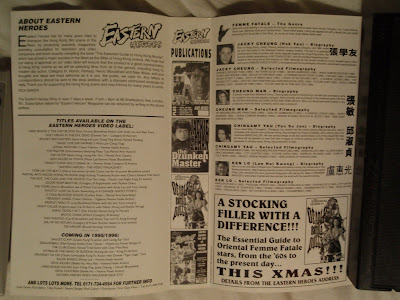 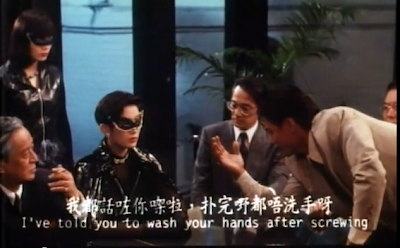 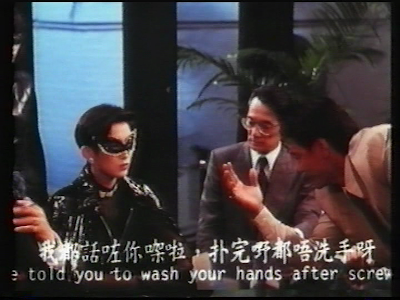