New DOCUMENTARY on the granddaddy of GORE MOVIES 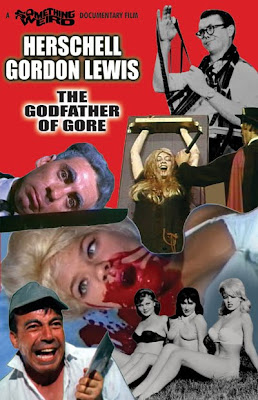 Just brilliant!!! There's a new docu on Herschell Gordon Lewis in town called HERSCHELL GORDON LEWIS: THE GODFATHER OF GORE!!! Or rather it's gonna play festivals in the US so I guess it'll take forever before we get it on DVD but, still, VERY exiting!! The docu is directed by Frank Henenlotter and Jimmy Maslon and produced by Maslon and Mike Vraney of SOMETHING WEIRD VIDEO.

My own first H.G. Lewis film was THE GORE GORE GIRLS which I bought on bootleg VHS from Psycho Voodoo Video in Melbourne in, ehh, I forget. Early to mid 1990s. I reviewed it many yrs later for an issue of Stay Sick! magazine


There's a trailer for the docu on Something Weird Video's web-site but I can't embed it here so check it out here.

Take an outrageous ride through this wild world of exploitation films with this thoroughly entertaining documentary, HERSCHELL GORDON LEWIS - THE GODFATHER OF GORE!

But that's not all - Lewis conrinued to assault audiences with such retro campy classics as "She-Devils on Wheels," "Blast-Off Girls," "Just for the hell of It, "Two Thousand Maniacs!" and the incredible "Wizard of Gore!"

Experience a decade of motion madness - with tons of clips, rare outtakes testimony from the people who were there, and a rabid sense of humor - as HERSCHELL GORDON LEWIS - THE GODFATHER OF GORE leaves you laughing and screaming at the most amazing motion pictures to ever play American Movie theaters!