The coolest poster I DON'T have!

Fred Adelman showed this very cool poster for I DRINK YOU BLOOD / I EAT YOUR SKIN over at Dvdmaniacs and I simply gotta "reprint" it here. 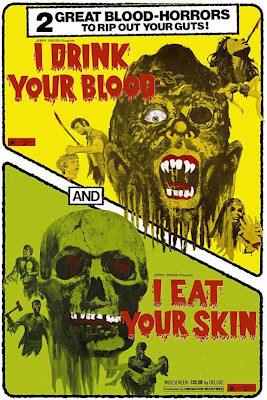 Very cool! And of course I DRINK YOUR BLOOD is totally gory and very cool!! (I reviewed it in Banned in Britain #2). Gotta get I EAT YOUR SKIN too!


I DRINK YOUR BLOOD
Ahh, this is the stuff gore flicks are made of!!
Hmm, how do you describe I Drink Your Blood? Well, imagine a mix between a zombie movie, a 60's drug movie and some Charles Manson movie with crazy Satan worship hippie killers - and then throw in a bucketful of gore and you have I Drink Your Blood!! This is such an amazing gore feast that it's unbelievable it hasn't been released uncut anywhere until now, more than 30 yrs after it initially came out.
A group of Satanic hippies arrive to a small town (Pop.: 40'!) in the middle of nowhere. A local girl gawks at 'em from behind a tree while they engage in a Satanic mass. They discover and attack her. It's unclear whether she's 'just' beaten up or raped. Their van brakes down and they decide to stay in an old abandoned hotel. The girl's granddad gets his gun out and goes over to kick them out of town but they force-feed him LSD. So now his 10-12 yr old grandson decides to take revenge so he kills a rapid dog, detracts blood from it with an injection needle and injects it into meat pies at the local bakery - meat pies that the hippies are going to eat. Second half of the flick is one long orgy of the now rapid hippies who, much like Manson and his 'family', slaughter the locals.
So what can you say about a film like I Drink Your Blood? Well, except that it's totally great of course!! It's directed by David Durston, it's low budget, all the actors were unknowns, and it's got that special 'something' feeling to it that a whole bunch of innovative horror movies from that late 60's/early 70's era have. It's quite gory and you can understand why it would've been censored in some areas (like the UK). However, I must admit it's pretty weird that it's never been granted an uncut release [in the US] until this new DVD was put out by Grindhouse recently. It's gory yes, but not any more than say Dawn Of The Dead, The Gore Gore Girls or Last House On The Left. By the way, if you get hold of the DVD now it'll most likely be the Fangoria distributed version. For some reason - and I have no clue as to why - it seems the folks at Grindhouse are a buncha deadbeats who decided to put the DVD out only as a limited edition and then let it go out of circulation [edit: it's been re-released and is easy to get now]. I must admit I hate and loathe (two words that basically mean the same) those trendy limited editions. I mean what's the fucken point!! Fortunately Fangoria obtained the rights and are selling it now through their magazine. But of course, as you know, nothing is safe in this world so I urge you to get hold of it before it disappears again. It's a very entertaining movie and the DVD's got heaps of extras. By the way, one of the 'unknown' actors was Lynn Lowry who later appeared in Romero's The Crazies and Cronenberg's The Parasite Murders. Among the many extra features the DVD also features a new interview with Lowry in which she mentions that the film introduced her to 'sex, drugs and rock'n'roll' - and director Durston sings a song about how to make an independent movie!!!
[originally printed in Banned in Britain #2 from 2004]
Posted by Jack J at 6:06 PM No comments:

"The Search For Weng Weng" is finally here!! (well, the T-shirt anyway)

YAY! SPIFFY!! My new Tee from Andrew Leavold's upcoming documentary film "The Search for Weng Weng" (about Weng Weng, the little big star from "For Y'ur Height Only" and a couple of other Filipino movies) arrived today! Niiice.
Cheers Andrew. 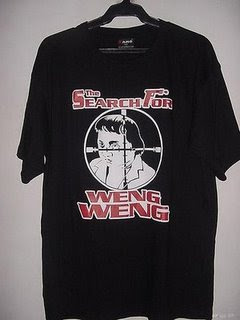 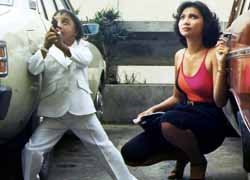