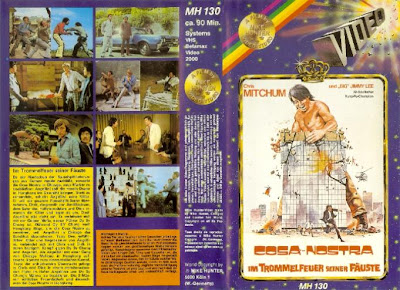 Here's the German VHS cover for Bobby A. Suarez' entertaining Chris Mitchum film COSA-NOSTRA ASIA made in the Philippines in 1973. Canisius (aka Philipp) of Cinehound forum was so nice as to send it to me as a surprise gift (in order to get me to speed up sending him some stuff which... I was being slow doing. Yes, I'm a slow bastard, sorry to everyone who's still waiting for something!). Anyway, big thank-you's go out to Philipp!!! You're the best, mate!!! More people ought to send me rare films for free. LOL. And yes this is indeed a rare film! COSA-NOSTRA ASIA (aka Asia Cosa-Nostra) has never had an English language video or DVD release and exists only on video dubbed to funny languages such as German, French and Spanish. There are three different German video releases and the one Canisius sent me is a bit different to the one I'm posting here. There's white instead of blue and the pictures are arranged differently on the back of the cover. And it's a cool bigbox edition with the cover printed directly on the box. Very nice (and as I said a rare tape too). The German VHS is fully letterboxed and dubbed in German. I have no idea whether it's cut or not.
Posted by Jack J at 11:22 PM No comments: 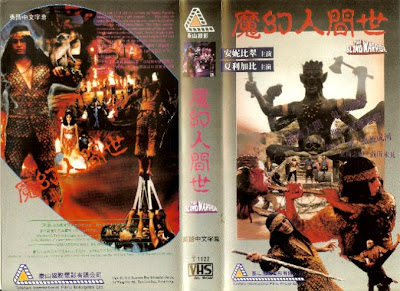 I wrote a piece on the wild Indonesian THE WARRIOR (aka Jaka Sembung) series here and I just wanted to show you an awesome cover for the Hong Kong video release for THE BLIND WARRIOR (aka Neraka Perut Bumi) (which is actually a spinoff film from the series). 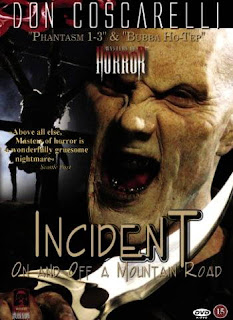 My second episode in the Masters of Horror series (but actually the first one that was aired) is Don Coscarelli's INCIDENT ON AND OFF A MOUNTAIN ROAD. A chick who's left her bossy boyfriend crashes her car on a deserted mountain road miles from anybody else. Well, anybody except some monster guy who's main purpose in life is to capture and have fun with girls who crash their car. ;o)
Coscarelli's episode is pretty good and very much in the same vein as films like WRONG TURN and THE HILLS HAVE EYES. There's a slightly different twist at the end though. :o)
It was nice to see a chick play the main character and she didn't even need help from some male stranger who just happened to pass by. Gee, wauw. The story line may exist within the confines of well known territory but I have no problem with that as long as the film is entertaining or/and well played (or has tons of gore, LOL). And INCIDENT is both entertaining and well played (there's some gore too). Oh, and Angus Scrimm aka The Tall Man from Coscarelli's PHANTASM films is in it too!