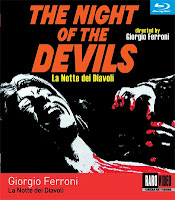 My... gawd!! I have somehow completely overlooked the brilliant piece of news that the American branch of RARO (Italy) is going to release NIGHT OF THE DEVILS (aka La Notte dei Diavoli) on DVD and blu-ray in a few days!!!

A few of us oldtimers in the field of horror film collecting know the film as Demonen der nacht as that's the title of the old uncut Dutch VHS but regardless of whatever title is used this is certainly splendid news!!! 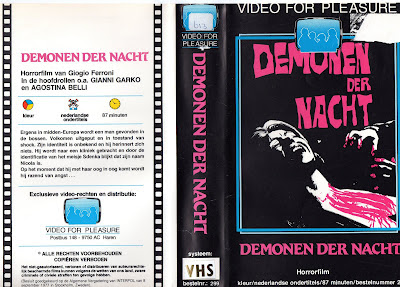 NIGHT OF THE DEVILS has never been released on DVD before and the old VHS releases are all few and far between. The film is directed by Giorgio Ferroni and it's based on the same story as Mario Bava's BLACK SABBATH.

The DVD is going to carry both the Italian and English dubs, and it'll have subs in English and German. Oh, and restored print too! NIGHT OF THE DEVILS is the best film you'll ever see! So see it!!

For more info go to RARO US's site here and go here for Richard Schmidt's (from dvdmaniacs aka Richard of DM) great review.


The Dutch cover isn't from my own tape but from Horror CK's blog. Cheers, mate.
Posted by Jack J at 8:53 PM No comments: