- or: The day "PAY HER OR I'LL BEAT YOUR CAR, PUNK" blog became offensive!

As if we didn't have enough problems with facebook and YouTube censorshit nonsense, now Blogspot (aka Blogger.com) is trying to up the game. Yes, Blogspot!!! The olde blog platform that hardly anybody uses anymore. The one that you're reading this post on! Most blogs on said platform are probably dead and floating around in Cyberspace like old Mir stations.
I just got two emails from the "good people" at Blogspot. They've deleted two of my posts (check one of their identical emails posted down below). So I'm thinking, "Hmm, what could be so objectional to them that they would censor me for the first time in my career on their platform? Mind you I've been here for about 15 years or so. Was it the true snuff porn that I posted last week? Or the colourised pictures of dead infants?? Was it my "Fun with Car Accidents" series???" (I'm joking of course). 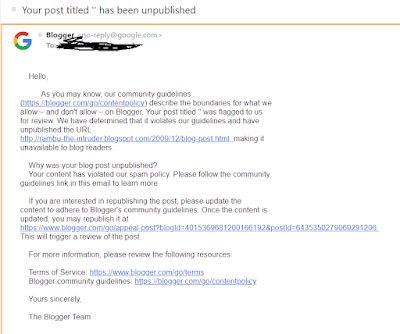 Nope! It was two VHS covers from Indonesian B movies that I posted on a blog ... in 2009!!! 13 years ago!!!
And get this: I posted them on a blog that I have never even launched!!!!!
Many years ago I got this "great idea" (if I may say so myself) for a blog all dedicated to the Kiwi actor Peter O'Brian and his wild Indonesian RAMBO ripoff film called THE INTRUDER (aka RAMBU). In 2009 I posted a dozen video sleeves and then (mentally) put a post-it sticker on it saying "finish this whenever you get the time". Of course now 13 years later I still haven't done anything about it.
Needless to say, I wonder about the "your post was flagged" comment from Blogspot. My un-launched blog was "public" but I had ticked "no" in the box where they ask if you want search engines to be able to find you (btw, I've just changed the blog to not being public). I'm guessing it's a blogger auto "flagging" of the two posts.
But still very odd. And very annoying that - in contradiction to facebook - they don't even show you what they felt was so objectionable. The two posts are GONE. Even their headlines are gone. But as I said all I had posted were vhs covers. And old Indonesian B movie covers don't have burning kids or hardcore porn on them. All very odd - and very, very annoying. 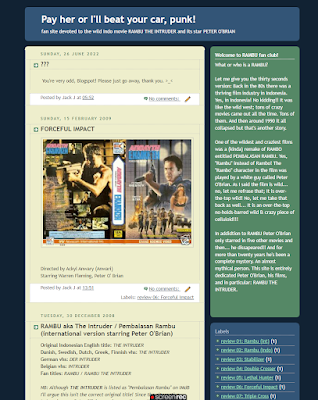 PS: The title of the blog: At the beginning of THE INTRUDER two low life and good for nothing creeps accidentally ram their car into an old woman. They get out of the car and start yelling at her. A Rambo dude just happens to drive past. He gets out of his car and tells them to cover her ruined groceries. Of course they won't. "Pay her or I'll beat your car, Punk", he says and you know you're in for a wild ride. THE INTRUDER has never been released officially on dvd or bluray, but there are video tapes, vcd's, bootlegs and downloads out there. The best video release picture wise is the (very, very, very rare) Belgian release: fully letterboxed - but also dubbed in French.
Posted by Jack J at 5:26 PM No comments:

aka Angkor: Cambodia Express (original title according to IMDb)

English dubbed fullscreen trailer, clear bright
picture. Missing a bit of footage at the end.
Letterboxed version of the same English
dubbed  trailer. Complete, but very dark.
I don't have this film but there are two pretty good and informative reviews on IMDb
PS: Thanks to the two channels that originally uploaded these two trailers. And boo-hoo to them both for changing the trailers to "private" after I made my post. Good thing I made sure to download them right away!
Posted by Jack J at 7:05 AM No comments: