Ol'e Drac gets a bathtub... I mean Bafta

He'll spit in your face if you mention Dracula to him but, hey, he's still the best Dracula there ever was in my opinion! DRACULA from 1931 may be the version every scholar agrees to is the "real" Dracula film but to me it's Hammer Horror's HORROR OF DRACULA (which actually, originally is also just called DRACULA in the UK). The other day he received the BAFTA prize for having made a lot of awesomely cool films for a real long time (altho they phrased it differently). I taped the show but haven't bothered to watch it yet but one segment I made sure to watch is Christopher Lee's speech and now by the wonders of YouTube you can all watch it. :D

PS: Please don't send hate-mail; Calling Lee Hammer studio's finest was just for the headline. Needless to say he's rivalled in every way by Peter Cushing but mentioning that would have made for a crappy headline!

Four Flies on Grey Velvet on dvd from AWE 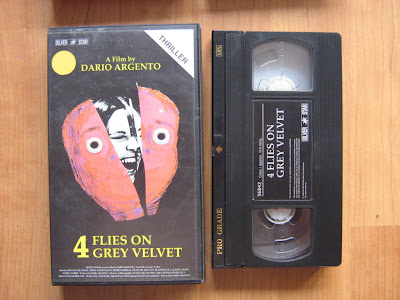 Whoah, big piece of news there! AWE will be releasing Argento's FOUR FLIES ON GREY VELVET (which ran in the Danish cinemas as Fire Fluer) in the second part of this year.

Very cool! Good on ya, AWE!! The big question is of course: Where did they buy the rights from? Dario Argento (who owns the world rights for outside the US) or MYR who released the reg. 1 bootleg (yes, it's a bootleg). I certainly hope they're getting it from Dario who would be able to provide them with an uncut print. The MYR disc is missing 40 seconds and reportedly has problems with the various dubs. I hate buying cut prints so I haven't even bought the MYR disc (I have the German boot).