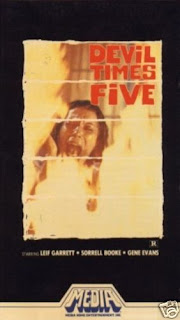 I watched DEVIL TIMES FIVE tonight and, whoah, what a cool, bizarre and devilish wee horror flick this is! Five kids from a car crash turn up at a guest house in the middle of a snow engulfed nowhere. Guess what happens. No, actually, DON'T guess! Get the film! It's an awesome slice of obscure 1970s American horror. And there's quite a bit of cheesy gore too so I'm happy as happy can be. You should be happy too: Check out this fine but sadly often forgotten entry to the American 70s horror cinema.

I watched the film on an NTSC video tape. I received the tape yesterday and the eBay seller I bought it from stated the cover was "in good condition".

Obviously we speak very different kinds of English as his definition of "good condition" left enough room for the cassette to be cut on ALL sides! Hell, the right side of the cassette was completely missing and so was the top! But hey, the tape itself had PERFECT playback ALL THE WAY THRU THE FILM!!! Wauw!!! How often does that happen with tapes from 1984!!!

DEVIL TIMES FIVE is also out on a widescreen reg. 1 DVD but the tape is open matte and it looks just fine! Anyhoo, no matter your format of preference just get it. You'll thank me for it later. xD
Posted by Jack J at 1:15 AM 4 comments: