The Japanese mess that is the DEMONS sequels 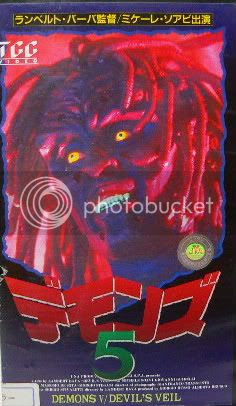 Here's a list of the Japanese VHS "sequels" to the first two Italian DEMONS films, DEMONS and DEMONS 2. Needless to say, they're sequels in name only.


Notice:
Tread carefully when you walk on that ice-thin surface that is the IMDb. A lot (A LOT!!) of their info is obviously written by monkeys that have been taught computer skills.
No, the Japanese title for IL GATTO NERO isn't Demons 6: Armagedon on the video cover, it's Demons 6: De Profundis. And no, MASCHERA DEL DEMONIO has certainly never been released ANYWHERE as "Black Sunday". Someone who obviously ought to be on strong medication "cleverly" figured that since it's the alternative title for MARIO Bava's film MASCHERA DEL DEMONIO it would probably also be the alternative title for the LAMBERTO Bava film of the same Italian title. Of course it's not! DUH!!!


Thanks to Jayson of Basement of Ghoulish Decadence for some of the info.
Posted by Jack J at 7:04 PM 3 comments: