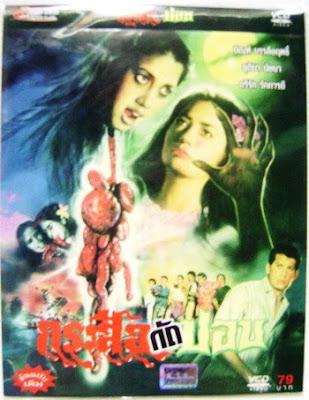 Funny story. As you probably know I watch all kinds of weird horror movies from around the globe. One of my recent discoveries is the "Flying Head With Intestines Dangling Underneath" genre. For years I've been familiar with the very entertaining MYSTICS IN BALI but I always figured it was just a single film and not an entire genre but as it turns out there's a whole heap of films from Indonesia and (especially) Thailand about flying heads! Recently I've been able to find some of these films on VCD from Thailand (and on video from Sweden!!!) and a couple of days ago I found another one, KRASUE KUD PORB, at an eBay store in Thailand. Unfortunately someone else had already made a bid for it but I thought I'd just try and outbid him. After all, how many people are interested in these films. But then something most unexpected happened; the other "seller" kept bidding until we reached $60. Now, dear reader, think about this again; we're talking 60 dollars for a bloody un-subtitled video-cd with crappy picture quality. Even my bidding $60 was crazy so I decided to stop when the other one outbid me with $61. None of that is suspectful... but then this morning... I received an email from the seller saying the other bidder didn't have the money to pay for the VCD! So if I wanted the film I could have it for $60! Yeah right, you think I'm an idiot!! One of my film friends and I have both previously experienced to have lost auctions from this seller and just after the end of the auction he has emailed us and said that by chance he has just found an extra copy which we can buy for the same price as the winning bid. I got a feeling this seller now got greedy and wanted to see how far he could stretch the bow. I was so annoyed I began going thru all the VCD's at eThaiCD.com (often you can't do an ordinary search due to Thai titles being transcribed differently from Thai to Roman letters) and after about two short minutes I found it... at the price of... 6 dollars!! Including postage!!!
It's pretty cool to get this rare VCD ten times cheaper but it's also sad that there are people who'll go to such great lengths in order to make a buck.
Posted by Jack J at 1:22 AM 2 comments: