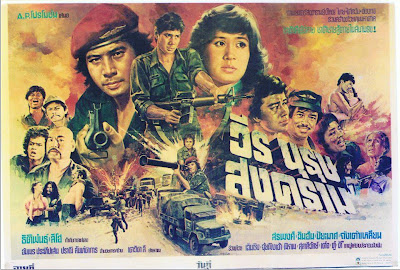 1) The original version (under the Last Breath title) is released on VHS in Taiwan and Hong Kong, and there's a tape released to the Chinatowns in the USA.

2) The international version, entitled Jungle Heat (a different EDIT with alternative footage shot for this version, i.e. n-o-t a cut & paste version!) is released on VHS and around the world and on DVD in the UK and Germany (and sadly both are cut!).

3) And finally we have the VCD from Mainland China which is basically a different edit of the Taiwan version (including using the Last Breath title) but missing 20 minutes of footage but also has new footage exclusive to this version. I own all three versions.

He has never seen the film but he owns a poster (see above scan) and you can clearly see a famous Thai actor on it (I forget his name). The Thai collector claims that the actor is so respected in Thailand that they wouldn't have dared to put him on the poster if he weren't in the film and, although that's not proof of this versions existing it probably good indication that it probably does.

I'm hoping this version has at least made it to video-cd in Thailand. Unfortunately, Thai VCD's have a tendency to fly by by night never to return again. An American who lives over there told me there's so many VCD's being released all the time that it's pretty difficult to find a certain title once it's sold out. But I've been collecting long enough to know everything turns up if you wait long enough. Unfortunately, that often means many months and years of waiting, looking, asking, and asking again. In this case I don't even know if this version even exists. >_<