Woo-hoo, I have waited since 1964 for this!!! The mighty fine video company Anchor Bay has just released an equally fine collection of COFFIN JOE films from their UK branch! Yay!! Spiffy!!! 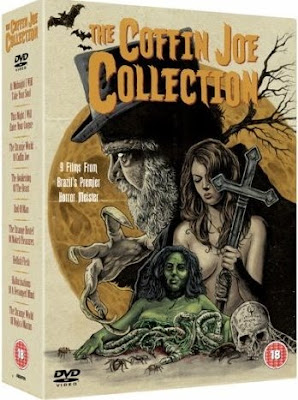 Obviously I don't need to tell you that Coffin Joe (aka José Mojica Marins aka Zé do Caixão) is Brazil's best... uh, no cross that out... Brazil's WEIRDEST film maker!! And certainly also the most INTERESTING (yeah yeah, he's also the only Brazilian film maker I'm familiar with but still!).

This mighty fine box contains 9 films, out of which one is a documentary;

In addition to the box Anchor Bay has also simultaneously released Coffin Joe's newest film EMBODIMENT OF EVIL (2008) as a 2 disc release. If you read the (multo lame'o) comments from most of the Amazon UK buyers who bought it you'll notice they all hate the film, haha. 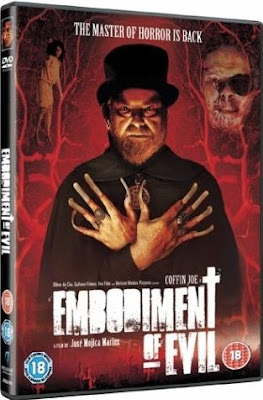 Well, I haven't bought it yet but having watched some of Marins' earlier work I can certainly figure out why they dislike it: Coffin Joe simply doesn't follow the same dozen of strict rules that almost every motherfucker in Hollywood does. How dare he make films that challenges the viewer. How dare he make horror films that don't hail NIGHTMARE ON ELM STREET or FRIDAY THE 13TH as God's gift to horror movie fans everywhere. How dare he be different.

Do yourself a favour and check out his films and ffs keep and open mind. DON'T BE AN AMAZON CUSTOMER REVIEWER WANKER!!!!!


NB: Don't get me wrong I DO like NIGHTMARE and FRIDAY etc. but I do acknowledge they're not the ONLY way of making horror films.
Posted by Jack J at 12:34 AM 5 comments: