I watched John Hillcoat's post-apocalyptic movie THE ROAD last night. I've wanted to get hold of it for a while but you know how it is... THERE'S SIMPLY TOO MANY MOVIES IN THIS WORLD TO KEEP UP!!

Anyhoo, I watched it and all the good stuff I've heard about it was true! It's really, really good. It's about a father and his young son and their travel thru a grey (as in very, very grey) destroyed America after some kind of apocalypse. It's never explained what happened in the last days and it doesn't matter at all. What matters is the result and what they have to go thru. The movie is a lot like STAKE LAND which I also watched recently and which is also about an older guy and a young boy travelling thru a destroyed land. However, altho I totally loved STAKE LAND this seems more grim as it's set in a realistic future that could actually (easily?) happen. 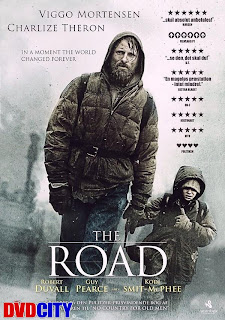 Altho STAKE LAND is also made to look very realistic it is of course within the boundaries of the old Marvel Comics moniker, "What if..." (What if Peter Parker had become The Hulk, etc). In this case it's just "What if we assume vampires really exist" - and due to the lack of, ahm, vampires THE ROAD is just all the more real.

I started off calling it a post-apocalypse film but that label almost doesn't fit! It is set in a post apocalyptic setting but we're missing the ingredients we usually connect with the genre (a genre all perfectly spawned by George Miller and MAD MAX II and the 20 Italian knock-offs that came right after). There are no road warriors, no funny helmets, no hunt for petrol, no funny (cool?) looking biker gangs, etc. etc. And no one wears clean clothes as in those films; In THE ROAD everyone looks like they haven't been washed for three years.

THE ROAD is quite long but doesn't overstay its welcome. Actually it just seemed to fly by and I don't think there was one single moment in the film that could have been omitted. One funny (interesting funny) detail is that this very American film about a fucked up America was made by a British director and the main cast is played by a Danish American and a South African! (Viggo Mortensen & Charlize Theron). The boy is played by Kodi Smit-McPhee (who is perfect for the part). Robert Duvall, the star from the best gang film ever, COLORS, is in there too - altho I didn't actually recognise him till be began speaking! 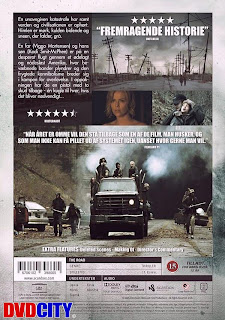 The soundtrack is awesome too, it's by Nick Cave and whatshisface and I actually got the soundtrack CD way before the DVD.

The trailer that I'm posting here has an introduction from Clever TV and the only reason I'm using that version (as there's also a YT upload without the intro) is that the presenter is just too fucken hilarious!! She doesn't know what the fuck she's talking about and tries to make it look HIP to introduce a grim, bleak and unpleasant film about the end of the world (or the end of American anyway). Haha.

The version I bought is the Danish DVD (50 kr. from Kvickly) which has a Making of, deleted scenes, and a commentary track by the director. I find it extremely annoying they didn't include the trailer but otherwise it's a good release.