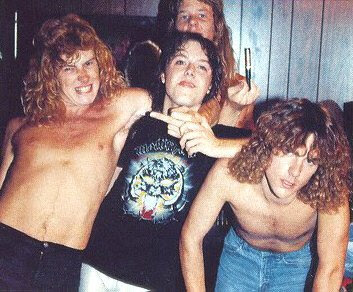 I remember exactly where it began. Ehh, kinda. In 1984 Danish television ran a series of 6 one hour programs entitled "Heavy Metal"!!! I taped them all (on Betamax!). Unfortunately tapes were expensive in those days so I think all (or most anyway) of them were taped over eventually. Anyway, the first episode featured an interview with a very young Lars Ulrich and I just knew I had to have their records! The first one I got was the "Creeping Death/Garage Days Revisited" EP and, woah!! This was something completely different to the hardrock and heavy metal records I had in my collection! Stuff like Iron Maiden, Rainbow, and Girlschool (!!!). It was different to the punk records I had and it was certainly different to the new wave stuff. This changed everything to a lot of youngsters who grew up in northern Europe in the mid-80s. 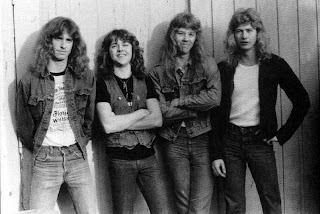 The only proper, big magazine at the time was the original German edition of "Metal Hammer" (the UK version wasn't published till much later) plus of course the tons of underground fanzines (my very first metal zine was "Metallic Beast" whose editors later went on to write for "Moshable"). Anyway, I found this photo (the top one) on some site and it brought back memories; You see this pic was also on the cover on the "Garage Days Revisited" bootleg LP which I bought circa 1986/87. It cost me an arm and a leg! But it was an awesome record to get in those days cos in contradiction to most other boots it didn't contain a shitty recorded live gig but was most of the legendary "No Life 'Til Leather" demo + some other demo from a studio session to "Ride The Lightning". Yeah!! Happy days. If they had broken up after "...And Justice For All" I'm sure they'd still have been the best thrash metal band in people's minds. As it is... well, you know.