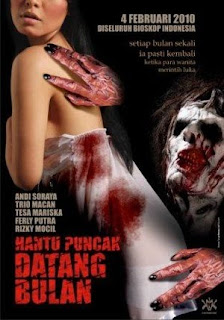 A 2 sec. intro to Indo flicks: The wild film industry in the 80s died around 1990 due to a change in government towards a more strict religious tone (according to Pete Tomb's Mondo Macabro book it was LADY TERMINATOR which did it! :D ). Well, in the last couple of yrs the atmosphere has kinda loosened up a bit and they're making horror movies again, however this new one, THE MENSTRUATING GHOST OF PUNCAK (original title: Hantu puncak datang bulan), is apparently too much for Muslim sensitivity in that country:

JAKARTA – A NEW Indonesian horror movie about a menstruating ghost ran foul of the country’s highest Islamic body on Thursday.

‘Hantu Puncak Datang Bulan’ (The Menstruating Ghost of Puncak) made its debut in Jakarta on Thursday and was quickly condemned by senior clerics in the mainly Muslim country.

‘I watched that horror movie… it contains sex scenes, violence and decapitation. I call on the film censorship board not to approve its screening,’ Indonesian Ulema Council official Amirsyah Tambunan told AFP. ‘Muslims have the right to watch the film but I suggest they don’t because it contains scenes that are against Islamic principles,’ he added.

But Tambunan said the council, which is the highest Islamic body in the land, had no plans to pass a fatwa or religious edict forbidding Muslims from watching the film. ‘Hantu Puncak Datang Bulan’ contains graphic gore scenes and erotica involving scantily clad actress Andi Soraya.

In December, Australian movie ‘Balibo’ was banned because it depicts the alleged murder of five Australian-based journalists by invading Indonesian forces in East Timor in 1975. Indonesia claims the men died in crossfire. — AFP

Thanks to El Schnaflos who posted about this on Uncut.dk forum.
Posted by Jack J at 9:36 PM 5 comments: