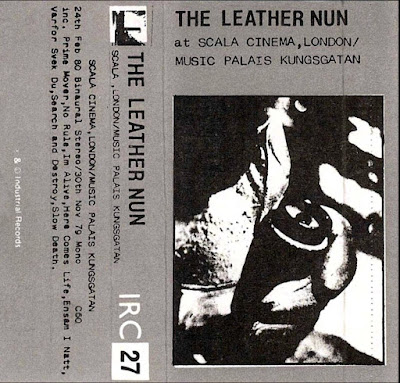 Sometime in the early 80s I was listening to a rock programme on the local radio. On that particular night they were interviewing Jonas Almqvist from the Swedish underground band Lädernunnan which had changed their name to The Leather Nun in order to get on MTV, haha (no, not really).

Anyhoo, after the interview the radio show played a live recording which from memory ran for about 25-30 minutes. I was hooked from the word go and soon after I bought their album "Alive" - also a live recording (from Denmark). But for some reason I never followed the band or got their other records. I guess it comes down to being skint. And probably due to the then lack of a world wide web I never discovered that their first release was another live album - a cassette tape only release. But here it is: The Leather Nun live at the Scala Cinema in London.

I used to live in London and I used to hang out at the Scala, but needless to say this was years after the leather clad nuns played there. Thanks to the wonders of the internet (I truly reckon the internet conveys the true spirit of punk) we can now listen to and enjoy (or roll your eyes at - if being square is your thing) this early recording of Lädernunnan. Yes, it's crude and raw and I would be VERY surprised if any of you could actually write down the lyrics from listening to this!

You get two choices; The tape is on YouTube (in two parts, side A and B obviously) but it's also available as an mp3 download from this post on the cool blog Die or DIY? Do notice the comment from the lead singer of the band in the comments section (posted in 2015)!