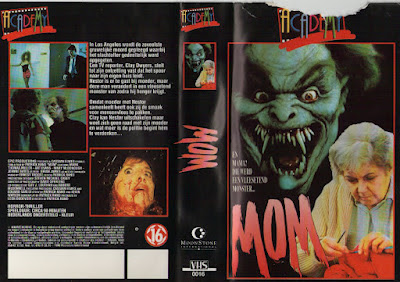 Here's the trailer for an unfortunately rarely seen horror/splatter movie from 1991 called MOM. It's directed by Patrick Rand who (according to IMDb) has only directed this one movie. Fortunately - since it IS his only film - the movie is good fun!

The plot: Brion James (the nasty replicant from BLADE RUNNER who utters the immortal line, "Time to die!") is a vampire/demon who is in need of a place to stay. So obviously he rents a room in the private home of an elderly lady. At some stage he gets hungry and, well, you figure out the rest.

There isn't one boring moment in MOM but I reckon the title is rather unfortunate as I'm sure it causes a lot of people (myself included originally) to mistakenly think it's probably a lame horror comedy. Well, it's not! It's a horror flick in the tradition of the late 80s splatter genre. Something else equally unfortunate is the fact that there's no DVD release. You'll have to find a VHS! If I remember correctly, I found my own copy in a Video Netto store in Copenhagen quite a few years ago. The tape is from Holland and is presented in fullscreen.

I couldn't find a trailer on Youtube so I found one on some other site and reposted it on Youtube. Thanks to the original uploader.