Is that a monkey wrench in your pants?

The GIRLS WITH GUNS genre 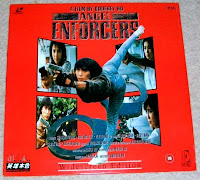 Most fans of 80s HK flicks have a soft spot for the Girls With Guns genre and, well, so do I. xD. I've been a fan of HK cinema for 20 yrs and one of the very first films I watched around 1991 was ANGEL. The film spawned both a handful of sequels and dozens of imitators. Unfortunately, a lot of them were very difficult and/or expensive to get hold of back then so needless to say there's quite a few I've never seen before. Well, until now that is! Now I'm actually tracking down many of these gems and enjoying them heaps. And I'm gonna start reviewing some of them from now on. I know, I know, don't tell me; in order to do this properly I ought to start off with the original ANGEL series but I just couldn't be arsed. It's been reviewed so many times already. 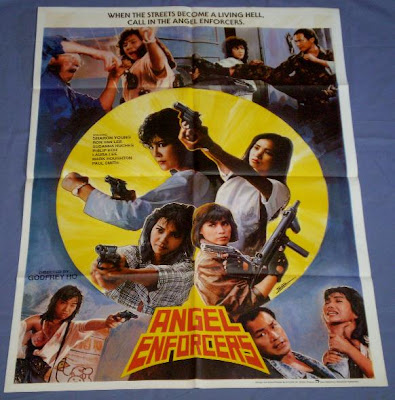 I wanna go straight to the knock-offs and tonight I watched the highly entertaining ANGEL ENFORCERS directed by Godfrey Ho. Unfortunately, it's never been released on DVD but I watched it in the best video version there is; the UK tape from M.I.A. I also own the laserdisc version of the same release but I haven't got my LD player hooked up so for now the ol'e VHS will have to do. It's both letterboxed and has good, proper subtitles. I'll watch it again and get a review done. Hmm, come to think of it, apart from last night's review of Obskuriøst #11 (on the Danish section of this blog) I haven't reviewed anything properly for years (almost). Gee. Anyhoo, I'll give the flick another spin tomorrow and get a review done. Until then, have a look at the English dubbed trailer (and thanks to Spannick for uploading it!).

PS: And yes that is the music from HALLOWEEN! LOL.