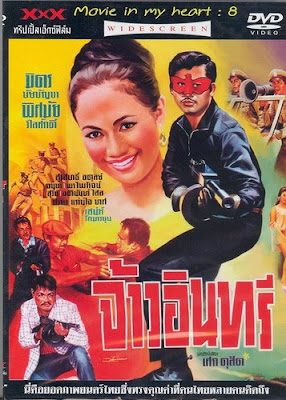 He grabbed onto the rope ladder of a helicopter, and was borne off into the sunset, with the aircraft climbing higher and higher as the action star dangled. He lost his grip and fell to the ground.

He was 36 years old. Thailand's most iconic star, he starred in a staggering 266 movies from 1956 to 1970, many of them with his doe-eyed onscreen sweetheart Petchara Chaowarat. There's a shrine to Mitr in Jomtien.

Some months ago Fred posted a short documentary film he'd made about the Thai superstar Mitr Chaibancha over on his blog. Now, a couple of years ago I read a special edition of Asian Trash Cinema on Thai action and horror movies but altho I've since then tried to keep up with Thai horror I'm by no means an expert and I must admit I knew nothing about Mitr Chaibancha until I watched Fred's film (which he won a spiffy prize for on Swedish television, btw). So have a look at Fred's film, it's in the language of the old Vikings but even if you don't capisce it all you'll get an idea of who he was (and you can get all the info you need by reading the rest of the article I linked to in the above). 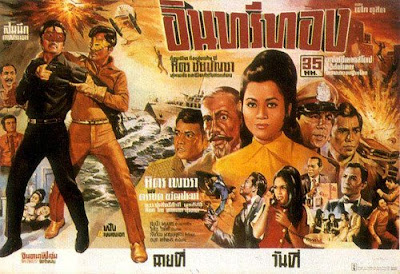 By the way, the above link is to the mothership of all blogs on Thai cinema; "Wise Kwai's Thai Film Journal". I'll advise you spend a few hours there if you wanna know anything about Thai films. The blog is in English and done by a Western (American I think) journo who lives in Thailand. It's a very informative and well written blog.

And talking about Thai films; If you've ever tried to figure out what's out on dvd and vcd in Thailand and what's not you have most likely discovered it's a JUNGLE out there!! Almost impossible to figure out what's released, what's not released, and what's OOP and not!! Well, on Wise Kwai's blog I found a link to another blog (of yet another English speaking Westerner living there) who's actually compiled a list of classic (pre 1970) films that are on Thai dvds subtitled in English (unfortunately most Thai dvds have no English option).

By the way, I'm by no means being rude here in not mentioning who any of these Anglo Thai blog people are but I guess they're shy people as none of them actually reveal their identities. LOL.


[PS: remember to switch the sound off on this blog's jukebox which you'll find at the bottom of this page! Yeah, what a fucken hassle, LOL]


And here's a trailer for Mitr Chaibancha's last film Golden Eagle (Insee Thong) (I'm not sure the music was supposed to cover the dialogue but it's the only trailer I could find):

Golden Eagle is one of the films that are now out on English subbed Thai dvd.
Posted by Jack J at 10:06 AM 1 comment:

Unfortunately the embedded clip isn't working but you can watch it here.
Posted by Jack J at 1:40 AM No comments: