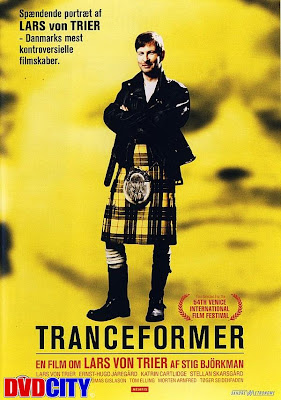 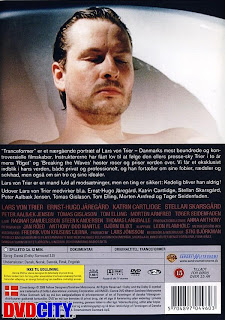 I bought Stig Björkman's documentary about Lars von Trier on DVD thinking it was something I hadn't seen before - but I realise I had actually already watched the film (and possibly also taped it) when it was screened on Danish TV a number of years ago. Oh well, at least I've got it on DVD now and it was cheap too.

The cover states the director followed Lars von Trier for two years and if that's the case I must say I find it's a pretty weak documentary! It clocks in after a mere 52 minutes and it looks totally like a docu made for television. I guess it was co-produced by Danish and Swedish television but that doesn't mean it has to have the look of it! Von Trier's films are also co-produced with various TV stations but you could hardly claim they look like telly movies!

The interviewer does get to ask Lars questions about his background, phobias, etc. and the film does have some depth - it's just not enough! Quite a few of the people who work with Lars, both behind and in front of the camera, are interviewed but nobody has anything negative to say about him or delivers any embarrassing stories. This is of course fair enough if they all love him but... it would have been nice if the director had included conversations with for instance some of the people who turned Von Trier down when he started out; At one point Lars mentions no one wanted to produce his films. Why didn't they? (obviously cos they were retarded but it would still have made for better documentary to hear their arguments/excuses).

To me the most fun moment is when Ernst-Hugo Järegård talks about one time at the Cannes Film Festival when Von Trier was extra nervous. The reason? He was wearing Carl TH. Dreyer's old suit from 1928 that he'd got hold of somewhere!!

All in all a decent documentary that ought to have been much better in my view. Too much info is left out. And why isn't MEDIA mentioned at all!?

It ought to be compulsory viewing for documentary directors to watch the two hour CRUMB (about Robert Crumb) before they're allowed to film anything! Now, THAT is what I'd call a well made, incisive and gripping documentary film!

The DVD has subtitles in English and Scandinavian. There's no extras. If you're in Denmark you can pick it up from TP Musikmarked at 50 kr. but their stock is low so be quick (I had to actually place an order for my copy).
Posted by Jack J at 3:03 PM No comments:

Well, out to read BANNED IN BRITAIN #2 that is!! I posted the issue here the other day but this here being a blog means you'll have to click and zoom in on every page. Someone somewhere in Cyberspace has just uploaded the very same issue to a site called Scribd.com and it's actually a much better way to read the mag as you can just flick thru (or scroll) the pages. Thanks heaps to the uploader! You can download the full zine as well but it seems you'll have to upload something first. For BiB #2 go here.

PS: if someone is reading about this for the first time let's just get the legal stuff out of the way: I publish "Banned in Britian" zine and you're allowed to download it for free and to further share it, as long as you don't make any money on it (but if you do please send me some as I'm totally skint!!)
Posted by Jack J at 11:27 AM No comments: