I'm told crooked ex-Soviet Union scientists are working on a time-machine and trust me as soon as they get the bloody thing into production I'll be first in line to buy a single ticket set for 1977-85. I'll pay for the full rotation so that every time I reach New Years Eve 1986 I'll automatically get hurled back to 1977!!!

This is "Metal Postcard" by Siouxsie & The Banshees performed live in 1977. The track is originally from their début album "The Scream". The Banshees also recorded it for John Peel and it was later released on a Peel Session 12" EP which I bought when it initially came out. Siouxsie Sioux' voice is one of the very best in all of contemporary music if you ask me!
Posted by Jack J at 10:20 PM No comments:

Labels: Siouxsie and The Banshees 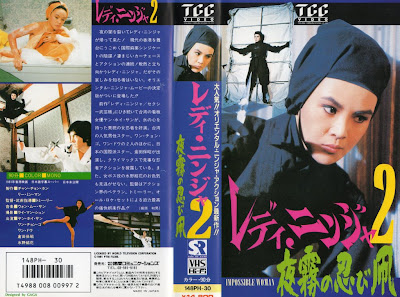 Not too shabby! Not at all, actually!! Tonight I won the Japanese VHS releases of IMPOSSIBLE WOMAN and THE EVIL DEAD! Bloody fantastic!! If you've been with me for a while you'll remember I won the Greek ex-rental release of IMPOSSIBLE WOMAN a couple of years back but I've wanted this one for quite a while. I already have a nice dvd-r of the Japanese tape so I knew how brilliant the picture quality is. Totally uber superior to the Greek tape; Colours much better! However, the Greek tape does have the advantage of original Mandarin audio with English subtitles. The Japanese tape is dubbed into English. But still!! (as they say in old kung fu films) And of course the cover is a beaut!!! 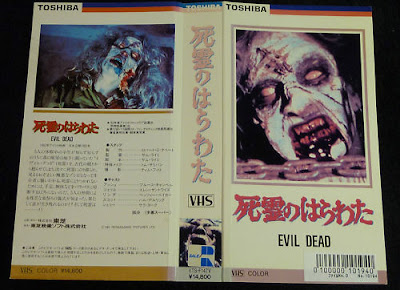 Next up is an little known indie horror movie called EVIL DEATH - hmm, or is it EVIL DEAD? Hahaha. Yeah, well, the days of it being only familiar territory to the most ardent hardcore splatter fans are long gone, and needless to say I've already got a handful of different versions of the film already but even so I still needed this rare Japanese tape. xD 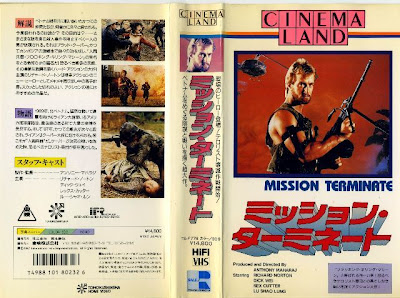 MISSION TERMINATE! I bought this one last night. It's a Filipino Vietnam war flick and one of the few films in which Richard Norton actually gets to play the good guy. That guy must have played bad guys more than most other bad guy actors, haha. I already have the Greek tape but, well, you know, you should always do the utmost effort to obtain the Japanese VHS of any film which doesn't exist on DVD! 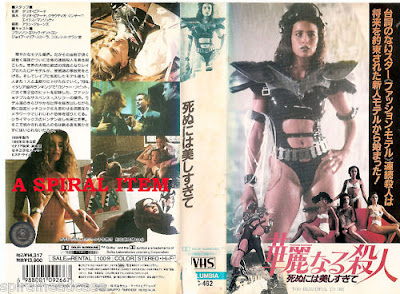 And lastly one that I sadly DIDN'T get: Dario Piana's TOO BEAUTIFUL TO DIE (1988). The film is a sequel to NOTHING UNDERNEATH (aka Modelmordene) which has one of the very few Danes in it who got to act in giallo films: former supermodel Renée. We're so proud of her (as if! If you wanna read about it on Wiki you'll have to check the English language page; the Danish page totally omits her film "career"). As far as I know, TOO BEAUTIFUL TO DIE isn't on DVD anywhere and the Japanese tape is one of the few releases. There's also a Dutch tape (ZDD has a boot off it) but it's fullscreen. This tape is lbx. Unfortunately some other schmuck won it. :/
Posted by Jack J at 3:14 AM No comments: