Over at Uncut.dk messages board we're trying to figure out how many collectors have these very rare Danish ex-rental tapes of Argento films. I know, I know, a completely waste of time but, well, that's how it is to be a geeky collector. :-D

In the early days these Danish tapes were very sought after by international horror and splatter movie fans as they offered uncut, English dubbed prints. Well, most of them were uncut anyway. ;-)

So, if you're either in Denmark or somewhere else; if you have one of these tapes do let us know. Cheers. You'll find the thread here.

And if you don't collect your films in a modly format that belongs to a bygone era then if nothing else you can enjoy these very rare covers that sure beat the crappy photoshop covers of today's DVD releases. They just don't make 'em like this anymore! 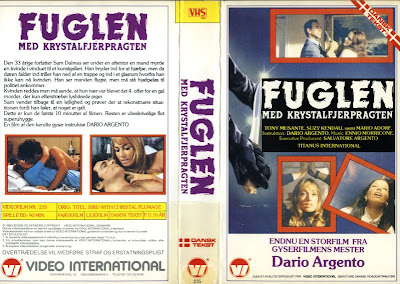 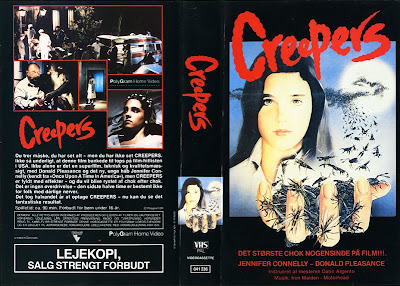 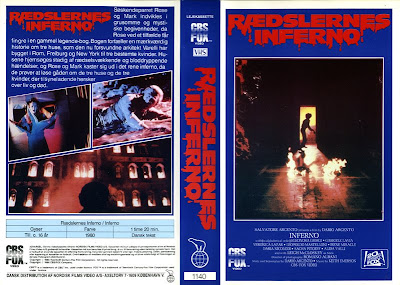 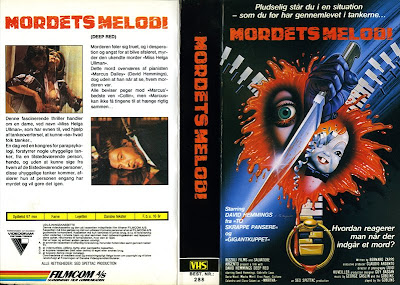 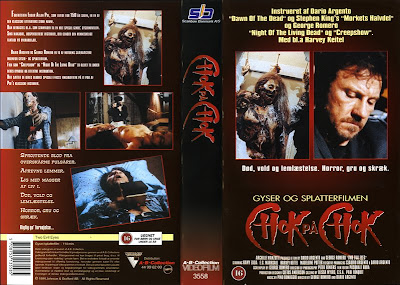 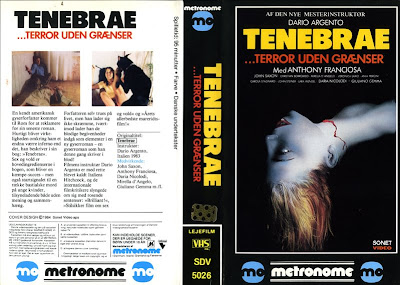 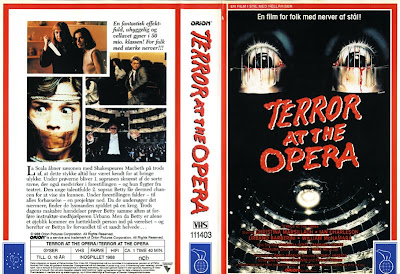 (click scans for bigger size)
All above scans are courtesy mr. Diabolik.
Posted by Jack J at 11:51 PM 10 comments: 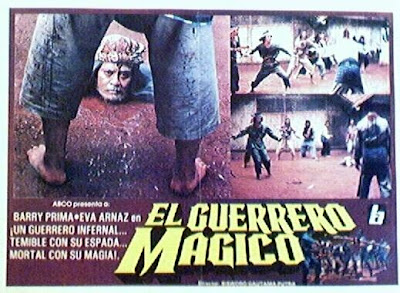 Mexican lobbycard for "The Warrior"

If you have never come across any of the JAKA SEMBUNG films starring Barry Prima you have been missing out on some WILD cinema!! The Jaka Sembung series, or THE WARRIOR as it's known in English, is a series of totally awesome and highly entertaining adventure films from Indonesia. Gory adventure films I might add! In short the series deal with the historical freedom fighter Jaka Sembung who fought the Dutch imperialists when they occupied Indonesia until fairly recently. A rather amusing detail is that one of the markets where the films have been most widely distributed on video is actually Holland. Indonesia's old scurge. :-D

The first film is THE WARRIOR (original title: Jaka Sembung Sang Penakluk) from 1981. It's directed by Sisworo Gautama Putra and stars Barry Prima in the lead role as Jaka Sembung. Also Eva Arnaz and Dana Christina are featured. Just like Barry Prima they starred in tons of genre films in the 80s. Barry Prima stars as the main character thru out the whole series. Here's a trailer for THE WARRIOR:

Fortunately, THE WARRIOR is easy to get hold of as it has been released on a spiffy wee disk by those gents from Mondo Macabro, Pete Tombs and Andy Starke. The first film is also out on a handful of different video releases, both in Greece, Holland, and the UK. There are also versions dubbed into other languages such as German. Beware of the UK tape as it's cut. It's missing no less than 31 seconds!!!

Unfortunately, the Mondo Macabro release is the only DVD of any of the films in the series. :-( Mondo Macabro were considering to put out the four sequels which would have been amazing not least since the last two films have never been released outside of Indonesia/Malaysia, nor have they ever been dubbed or subtitled into English. However, unfortunately the MM's DVD hardly didn't sell at all! According to Pete Tombs (from his posts on Cinehound message board) many "fans" were happy enough with downloading the film (illegally) from torrent sites. It's terrible to think that because of this we may never see proper DVD releases of these sequels.

Here's my VHS from Holland: 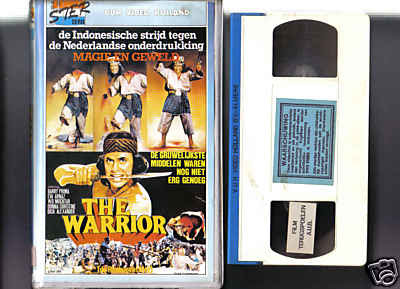 The second film in the series is THE WARRIOR AGAINST THE BLIND SWORDSMAN (original title: Si Buta Lawan Jaka Sembung). Directed by Dasri Yacob, 1983. The film was released on VHS in Greece, Holland and the UK. The UK tape is cut by 5 seconds. Check out the trailer here:

As the title suggests Jaka Sembung teams up with the blind swordsman character (it's a slightly odd title as they're actually not fighting each other but teaming up against the oppression!). The blind swordsman later returned in the spin-off sequel simply entitled THE BLIND WARRIOR (more on that later).

And here's my Dutch VHS cover for the film: 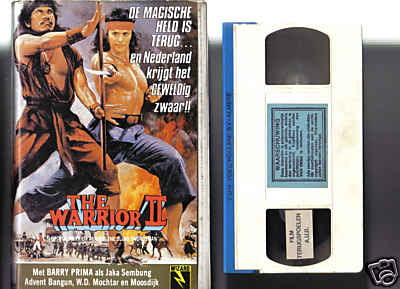 The last English dubbed THE WARRIOR sequel (unless you count the spin-off as a sequel) is THE WARRIOR AND THE NINJA (original title: Bajing Ireng Dan Jaka Sembung). Directed by H. Tjut Djalil (1983) who also directed LADY TERMINATOR, MYSTICS IN BALI, and many more. Some sources claim THE WARRIOR AND THE NINJA is aka The Warrior 2 but my Dutch VHS release clearly labels THE WARRIOR AGAINST THE BLIND SWORDSMAN as films #2. But whether the two films were swapped around in some territories I don't know. But my gut feeling tells me it's merely a fuck-up by fans who didn't spend enough time on their research.

EDIT: After I wrote this article and originally posted it on my other blog it has come to my attention that there's a good chance THE WARRIOUR AND THE NINJA is indeed film #2 in the series. It doesn't matter that much tho in regards to viewing enjoyment as they're totally unrelated in their plot lines.

Here's the trailer for NINJA:

And here's my Greek VHS release which is the one to go for as it's letterboxed. There's also a letterboxed tape from Australia but finding that one is probably more rare than getting laid at a dike slumber party (to coin an old Damon Foster joke, haha). Unfortunately, all the video versions I've seen are too dark during the night scenes. The best version (during the night scenes) is actually the Malay VCD where you can see what the bloody hell is going on, LOL. Unfortunately, it's in Indonesian, it's fullscreen, and pixelates all over the place. There are als Dutch and UK releases. Amazingly enough the UK tape is uncut according to the BBFC. :-O 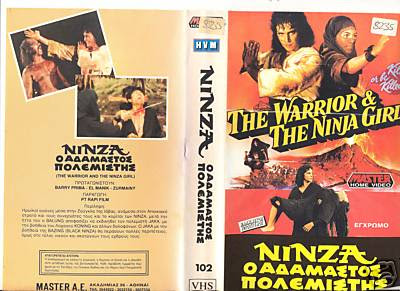 The last two sequels are BERGOLA IJO , dir: Arizal (1983) and JAKA SEMBUNG DAN DEWI SAMUDRA, dir: Atok Sugiarto (1990). None of them have English titles and I haven't been able to find any trailers for them, nor do I have any scans of the VCD covers. But anyway, regardless of how rare these films are (apart from #1) or that two of them aren't in English, if you enjoy wild and crazy movies then you really ought to check out the JAKA SEMBUNG / THE WARRIOR series.

And finally, the bastard 6th film in the series; the spin-off sequel THE BLIND WARRIOR (original title: Neraka perut bumi) in which the blind warrior character from THE WARRIOR AND THE BLIND SWORDSMAN makes a return. Directed by RATNO TIMOER in 1987. Timoer also did THE DEVIL'S SWORD (also released by Mondo Macabro, and highly recommended!) and many more. In contradiction to the "real" THE WARRIOR sequels this was actually released on DVD - twice even!! In the UK and Germany (both DVD's carry English and German dubs). Unfortunately both DVD's are long out of print but at least you have to chance of getting a copy from a friend. There was also a German dubbed VHS and an English dubbed VHS was released in Hong Kong (with Chinese subs). If you can find a copy of that video you're one lucky fellar cos it's very rare. 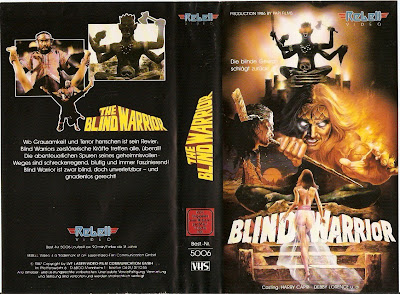 The German VHS which basically uses the same cover as for the German and UK DVD releases.
[click scan for full size]

There's no trailer for THE BLIND WARRIOR on YouTube so here's a clip from the film instead. It's... over the top - as is the entire series!!! You should try and find them.

THE WARRIOR AGAINST THE BLIND SWORDSMAN and THE WARRIOR AND THE NINJA are available from Far East Flix (yes, they are boots off Dutch video tapes). The picture quality equals VHS quality. 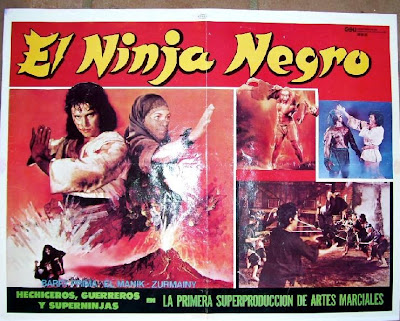