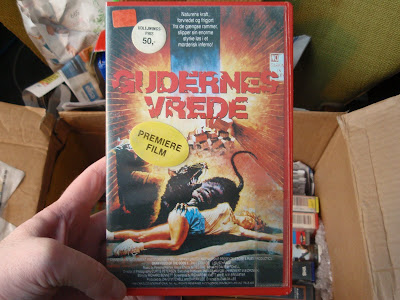 One of the films that I received in Kurt's box the other day is GNAW: FOOD OF THE GODS II. It's also out on DVD but the DVD cover looks like ass, and the VHS cover is hyper awesome if you ask me. I watched the film this afternoon and it was great fun. It's not a comedy but it's not all that serious either. The convoluted plot: Something goes wrong in a lab and mega huge nasty lab rats run amuck and cause terror and mayhem. There's boobs too. And splatter. You need to own this film! The Danish VHS is open matte so we are entertained by microphones in the top part of the fame. And in one scene when a lab professor starts to foam and goo splatters out of his face you can clearly see the tubes at the bottom of the screen where the blood and goo is pumped in. Haha. Highly entertaining and definitely recommended.

Kurt uploaded the scene where you see the tube (and some FX's guy's hand) going up the scientist's lab coat (left bottom corner of the screen at around 1m58s into the clip. And actually you can also see the tubes here in the thumbnail).