I remember something Damon Foster once said in an issue of Oriental Cinema: 'I'm so old dust comes up when I cough'. That's how I feel too. Well, at least now that I'm going to explain all this about some mysterious film I watched in my childhood:

In 1971 I was in my first grade (yes, nineteen seventy fucking one!!). My mum thought it would be a grand idea to sign me up for the film club at my school (thanks mum!) and a couple of the films had a lasting impact on me. One was about some cool supermen and the other... I'll get back to that one.

Of course being 7 yrs old I didn't bite into film titles or which country they came from so it took quite a while to find out about any of the films. A couple of yrs ago a friend of mine got hold of a video tape and his description over the phone sorta rang a bell: a flick with three cool supermen: and yes, there it was: THE THREE FANTASTIC SUPERMEN (I Fantastici tre supermen, Italy, 1967)!!! It was a bit of a let-down though. I had enjoyed it tremendously as a seven year old but in adult life it just seemed too silly.

However, the other film is still a big mystery to me. I remember it as being a kind of a crime movie. There was this evil dude who had an electric iron hand and when he wanted to hurt someone he'd just grab their face and just burn their puss to a crisp. The images of their burnt faces was pretty scary. At the end of the film the hero fought the evil dude and knocked him over so his hand touched a train track (I think) and electrocuted himself. Phew! Scary stuff when you're a first-grader

Anyway, obviously I'm still anxious as to find out which film this is. Does any of you know? Does it ring a bell? Since I was so young I didn't notice finer details such as which language they spoke. I think it would've been a western flick but I guess it could've been Asian. Any help is appreciated.
[originally written as a post over on Dvdmaniacs]


PS: The film is none of these films: The Projected Man, The Glove, The Black Hand, Creature with the Blue Hand, Hand of Death.

Thanks to everyone so far who has come up with suggestions.
Posted by Jack J at 9:33 PM No comments: 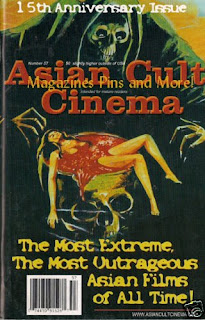 Bummer! I just received today's newsletter from Asian Trash Cinema (i.e. Asian Cult Cinema for you kids) and due to personal issues they're closing down the mag right away. The ish that's already out will be the last.
At least for now.

I'm aware quite a few fans of HK movies don't like Thomas Weisser because of, well, heaps and heaps of faulty info especially in the ATC books, plus info that was purely made up!! (and a friend of mine who collects spaghetti westerns told me Weisser wrote a book on the genre and reviewed a number of films even tho those films were only planned but never got actually made!! Haha).

And not least due to his being behind Video Search of Miami (VSoM) in the early days (not so much because he was behind it as such but because their video dupes were often crap, to put it bluntly).

But, hey, I bought the mag in the early days from when #1 came out. Actually from when the first incarnation of the mag, Naked! Screaming! Terror! the special HK issue (that later got re-released as ATC #1) came out! And back then, when Craig Ledbetter was onboard, it was a lotta fun.

Sure the mag hasn't been "fun" for a long time, the old excited fan feel went down the drains a long time ago but they still published good interviews and info. And I just love to read a REAL magazine instead of always staring into a computer screen. I was looking for a misplaced tape today and found an old issue of European Trash Cinema (from '92) and I thought Gee, why doesn't anybody do real fanzines anymore (and where the fuck is Craig Ledbetter?? I'd buy every issue if he put out ETC again!!).

The current issue #64 of Asian Cult Cinema magazine is the last.
Effective immediately, I am shutting down publication of ACC magazine.
Personal family obligations force me and my wife Yuko to retire from this business and - at least temporarily - to relocate in Japan.
This may be a brief venture. Or Yuko and I could be gone for a much longer period of time. Simply, we are uncertain of our immediate future; however, I have already passed company responsibilities to my assistant, Archie Cole.
Most of you already know Archie. He has managed the Asian Cult Cinema and World Cult Cinema website for the past eight years. Although he does not feel qualified to helm the magazine (see his comments below), Archie Cole is committed to continuing - and excelling with - the ACC E-Commerce website. So, most importantly, you will continue to have access to all the Asian and World Cult DVDs.
I want to personally thank you for your support. It's been a good 18 year run.

The above post was originally posted on Dvdmaniacs, yesterday. I simply couldn't find the energy to write a different post for the blog. Live with it! xD
Posted by Jack J at 5:24 PM 5 comments: