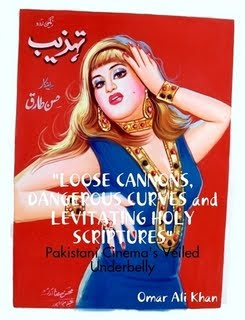 On Cinehound forum Pete Tombs once made the mistake of mentioning that due to a lack of space there was a full chapter that didn't make it to the MM book! A chapter on Lollywood cinema (i.e. Pakistani cinema) written by none other than Omar Khan who directed HELL'S GROUND (aka Zibahkhana). It was a mistake (haha) cos it meant I've kept bugging him on Cinehound ever since to put it out on their blog or website! Unfortunately, for some reason MM haven't wanted to do so. The chapter was actually included in the Spanish language edition of the MM book. However, ... lo and behold... Omar Khan has just put out what I believe is that chapter as an eBook (or eMag, whatever) for download! Go here. I can't comment on how good it is as I haven't read it yet (and thanks to Jared for the tip).
Posted by Jack J at 12:23 PM 3 comments: 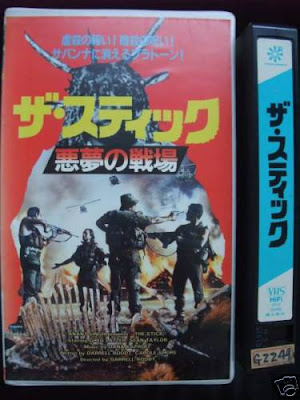 I watched the South African horror/war movie THE STICK tonight and if it had any value to mention it here I would most likely say THE STICK is thee best South African movie I've ever watched ... but as I've only seen three S.A. film ever it doesn't make that much of an impression on you, I'm sure! xD.

The movie is from 1987 and was made and is set in the middle of the apartheid era which isn't something you're likely to forget thru out the movie ("Why the fuck do we need to carry this fucken dead kaffer?"). South African patrols are being attacked and killed off by a ghostlike enemy. The army leaders don't believe in ghosts so they wanna get the enemy once and for all. And by "get" means: "I don't need any prisoners" as they chief commander puts it in his speech to his men.

A group of 8 men take off to find the mysterious enemy in the bush. I'll do a proper review on my other blog later but sufficient to say THE STICK is one helluva film! It's very good and there's not one single moment where your mind drifts off to tropical islands and native go-go-dancers in bamboo skirts.

THE STICK is tough, raw, unpleasant (there are no real likeable characters in the fillm) and not for the fainhearted! Most of the dialogue is in English with a few Africaans (i.e. old Dutch) sentences scattered around for good measure. Unfortunately, it's almost impossible to actually get to watch the film. There are no DVD releases and the few VHS releases are very rare. I got my copy from Japan for around 30 bucks + postage. The picture is fullscreen and as good as it gets for VHS. This film really needs a proper release.
Posted by Jack J at 2:48 AM No comments: