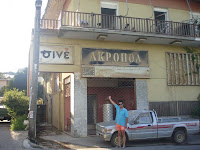 If you've followed this blog for a while you'll remember my posts about our good friend Bill Barounis of the one-man run Onar Films in Greece (who only release more or less lost Turkish movies of the wild sort) and his difficult situation after his health went bad just over a year ago.

I'm not familiar with the details of his first "situation" but I believe he had a kind of seizure of the brain due to too much stress. He spent two weeks in hospital, came home, got a bit better, but was then diagnosed with brain tumour. He began getting treatments and this has been going for about a year now. Then about a week ago I got word from Miltos (head of Cinehound forum and also located in Athens) who told me Bill's condition had deteriorated but that he didn't have any specific details. Today, Bill posted a brief piece of info on his Onar website to explain, and unfortunately he suffered a stroke last month! This is indeed terrible, terrible news!!!

Bill has always talked about how much of a jinx he is and how everything always goes wrong in his life in regards to Onar. The stories he's written about it have always been insane; stuff like he sent a guy to pick up a print but he fell down an elevator shaft! And someone else who was to do something for Onar got chased by gangsters. And one time there was a ghostly sound on a print and nobody in the sound studio could explain it. And lots more. And of course the worst thing was Bill's friend and Onar label mate Metin Demirhan (co-author of the book "Fantastic Turkish Cinema") who died untimely. 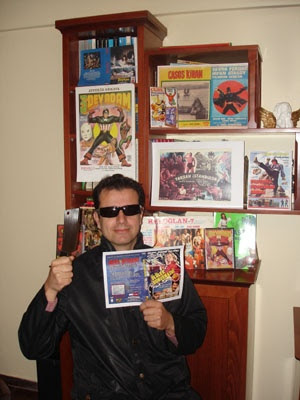 One time Bill said he wasn't going to post on Cinehound anymore cos he didn't want anything bad to happen to the forum since he was a jinx. I always laughed it off but, hell, maybe it's not so far fetched! It seems bad luck just haunts the poor guy. I can't tell you how truly and utterly sorry I am to learn about this latest chapter of Bill's condition! He truly deserves some good luck now! Bill, my friend, I wish you a full recovery and all the best.

YOU MAY CARE TO KNOW THE LAST MONTH I SUFFERED A STROKE.
I SPENT MOST OF THE DAYS IN THE HOSPITAL.
NOW I CAME HOME ON A WHEELCHAIR. MY WIFE WE'LL TAKE OF THE UNSHIPPED STUFF.
SORRY. DON'T KNOW ANYMORE WHEN ZAGOR WILL COME OUT.


Photos: I haven't posted the two bottom pictures before. They are from an interview with Bill that was posted on a Turkish language website in 2008. You can read it here (or at least look at it). You'll notice they use Bill's Greek name, Vassilis Barounis.
Posted by Jack J at 6:34 PM 2 comments: