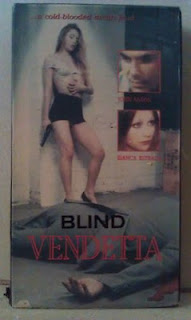 I decided to go to bed early for once and now it's 3:51 in the morning. Argh. Anyway, before I turn in here's the cover for an NTSC tape I won on eBay today. It's José Antonio de la Loma's little seen BLIND VENDETTA (aka Metralleta Stein) starring John Saxon and made in Spain, 1975. It's not released on DVD and apparently the only English friendly VHS is this US release. I won it at an auction on eBay UK. Only bidder. ^_^
I don't give two shits about IMDb scores but it's got a user score of 8.1 out of 10.