MONDO MACABRO'S ABANDONED WORLD-WEIRD PEARL
Here's a film you've never heard of. Or have forgotten you heard about. Or maybe you've heard of it but you've never seen if. Well, not unless you 1) watch world-weird cinema - and 2) don't limit your world-weird viewing to films that are being handed to you on a plate from the well-known labels. 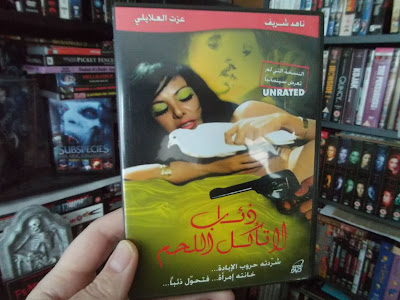 In 2008 Mondo Macabro was planning to put out a weird and wild Egyptian film from 1973 that has gory violence and nudity. Pete Tombs of Mondo Macabro described it this way in an interview to "Cinema Strikes Back":

"We've also got this Egyptian exploitation film. Yeah, we've got a couple of Lebanese/Egyptian movies. They're pretty interesting, as if Jess Franco met Jean-Luc Godard, you know, with a lot of (boobs). The guy who made them worked in Italy, with people like Sergio Bergonzelli, so he had that kind of sleazy stuff, but he had a political side, and an intellectual arty side. And he liked filth, and sleaze, and naked girls. So you put that all together and it was the early 70s and you've got a pretty good package. Kuwait Connection, it's called. "Wolves Don't Eat Meat" is the other title."

Unfortunately, MM never released the film. Later Pete said (on Cinehound forum), "I spent a long time talking to the Khouri's about this one, but we couldn't get the materials sorted to our satisfaction. It's not a no, but more of a maybe, if and when."

But the film exists on Arabic dvd (a pretty good English/French friendly release actually) and the film is a world-weird blast. I wish MM or somebody else would put it out on blu-ray so it could finally get the love it deserves.

I realise my post is shit in regard to being a review so I urge you to check out Todd Stadtman's cool and informative review over at Die, Danger, Die, Die, Kill!
(PS: and check out the 7 year old comments section!)

The music in the background is a quite scratched copy of the original vinyl LP of Jan Johansson's "Jazz på svenska".
Posted by Jack J at 1:50 AM No comments: