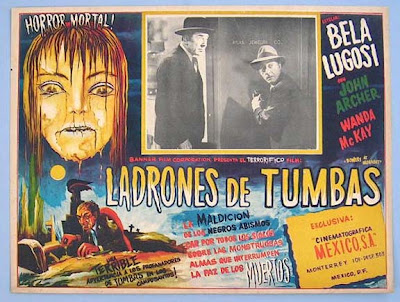 At some point during the wee hours I ate fried rice and watched Bela Lugosi in BOWERY AT MIDNIGHT. It's one of the "quickies" he did for Monogram studios and if you check IMDb you'll see a bunch of whiners complaining about the movie. I don't know what these sorry ass wankers want from their old b/w horror movies; Obviously Bela couldn't keep re-making DRACULA and went on to do other exciting stuff. Hmm, come to think of it BOWERY isn't actually so much a real horror movie as it's a "evil no-gooder doing insane stuff" movie! Bela teems up once again with Dave O'Brien whom he also did the excellent horror movie THE DEVIL BAT with. And just like in that film Bela gets to play an insane criminal mastermind who... does criminal insane stuff like killing his own men and leaving a corpse every time he does a new robbery! What a trademark, eh! In THE DEVIL BAT he wanted to kill people for revenge, in BOWERY he's simply a schizoid loco. LOL.

There's also a good looking babe and a (I suppose) handsome looking male detective but - lo and behold - as something of a surprise they DON'T get to get each other in the end nor even fall in love. In fact the babe's douchebag boyfriend gets killed halfway thru the movie (or becomes a zombie, whichever fits the description, LOL).

BOWERY AT MIDNIGHT runs just over an hour and doesn't overstay its welcome. I wanted to get the restored DVD from Roan Group but it's unfortunately OOP and is now way too expensive so I bought a cheapie disc from a label called Imavision and expected it to look like ass but was pleasantly surprise to find that the print looks excellent!! The DVD is a release from Quebec (my first Quebec DVD actually) but apart from the address and optional French subs it didn't look terribly Québécois to me. The cover text is in English and the same goes for the menu. There's no extras. I'm not gonna bother checking but from memory I think I paid around £3 for it via Amazon UK. Oh, did I mention it has zombies!! But they're crappy ones. Don't buy it for the zombies, haha. 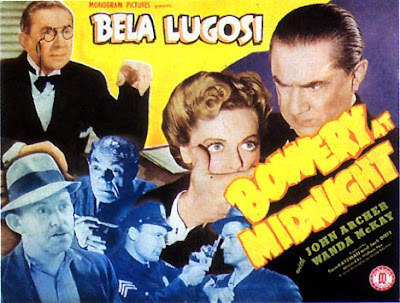 EDIT: I just checked Amazon.com after all and now the Roan bastard is down to 11 dollars and they're selling second hand copies for a buck, argh!! I hate you all, you scum Marketplace sellers!!!
Posted by Jack J at 10:20 PM 2 comments: