I've posted bits and pieces from this cool gig by the old legendary US punk-horror-schlock band THE MISFITS before but, lo and behold, I've just discoverd someone has uploaded the full show to Youtube. Cheer, mate! Great stuff!!

Info and track-list from the YT page:


From Misfitscentral dot com: "This was a day show for the cable access TV program, "Why Be Something You're Not" filmed in a storage room at Group W Cable in Dearborn, MI."

Earth A.D.
I Turned Into A Martian
Skulls
Devilock
Queen Wasp
Mommy, Can I Go Out and Kill Tonight?
Hate Breeders
Braineaters
Halloween
Bullet
Horror Business
We Are 138 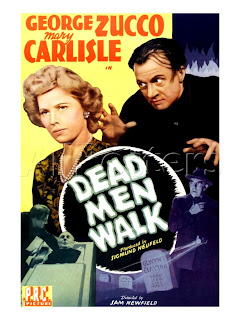 I watched this excellent horror movie last night (I've seen it before). George Zucco stars in a double role as a doctor and his own evil, deceased brother who dabbled in the occult while he was alive. And maybe still does in the beyond. Dwight Frye is also in there more or less repeating his part from DRACULA. Don't believe this deadbeats at IMDb who rated it 4.5/10!


PS: the 4-film dvd I linked to is the same as the one I bought. Amazon has listed it as an Image Entertainment release but the copy I have clearly says Retromedia on the cover and on the disc.
Posted by Jack J at 2:47 PM No comments: