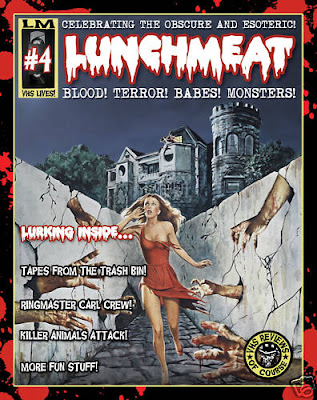 Great! The cool US horror flick fanzine Lunchmeat #4 has just been released. I can't really comment on it as I've just ordered it today so I'll quote the press release instead:

Come and get it, videovores! Issue # 4 of Lunchmeat is ready to be devoured!

We’ve stuffed our newest issue with in-depth reviews of cinematic curiosities such as Blood Salvage, Eyeball, Night of the Living Babes, Enemy Territory, and oodles of other buried gems that simply cannot be ignored! Also skulking around in this issue we have an interview with Carl Crew (Blood Diner, Dahmer), Rob Hauschild shares his tapes rescued right from the trash, a Killer Animals cover spread and, of course, a Living Dead themed crossword puzzle where you can win prizes. You read right: prizes!! Good ones, too!! Hell yes!! Oh, and did we mention a new and exclusive full page illustration from Putrid himself?! 'Cause that's in there, too!! Hell yes again!

What other tricks and treats await you in our newest issue? To find out, you’ll have to grab one…before it grabs you!! Keep those eyelids peeled and glued, kids! Hoooo-haaahhhhh!!!