If you go to Andrew Leavold's "The Search For Weng Weng" blog you'll find it isn't there anymore. The fuckfaces that are blogger.com decided it was, get this, SPAM!! And deleted it! So no more Weng Weng blog. I did a Google search to find an old ghost version of the blog to save but it seems they've somehow managed to delete the old versions as well. Boo-hoo. All that info gone forever.
Posted by Jack J at 11:46 AM 6 comments: 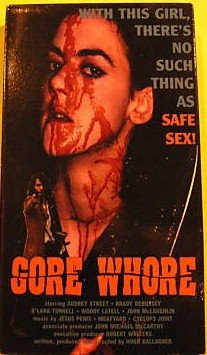 Recently, I won a copy of Hugh Gallagher's underground splatter flick GORE WHORE from 1994 on eBay. Unfortunately, it's quite rare and even more unfortunate is the fact that mr. Gallagher hasn't understood the importance in re-releasing this, ahm, charming independent production on one of those shiny little disks. Anyway, after having searched high and low for a copy for quite a while I finally found it at an auction a couple of weeks back and was able to watch it last night. And, whoah, it was totally like being back in the old splatter flick days of the late 80s, early 90s!

A scientist hires a lowlife private dick to find some chick who stole one of his formulas. The looser PI discovers the thieving chick isn't just capable of nicking secret formulas she's also a vampire hooker!! Haha, no shit. GORE WHORE is kinda a low budget (veeery low budget) relative of RE-ANIMATOR. Not only do the dead come back to life in the midst of bucket-fulls of gore, they're also brought back by using the old tried and well known green gooey stuff! However, in contradiction to RE-ANIMATOR it's just not injected in the same, ahm, way. The vampire hooker injects herself by using a big syringe DILDO!! Haha. Oh, and everyone else gets it up the ass. LOL x 10.

GORE WHORE is Hugh Gallagher's final film in his splatter trilogy; The other two being GOROTICA (1993) and GOREGASM (1990), and because I'm a fan of these amateur productions needless to say I was ENTERTAINED aplenty! These little flicks made by splatter movie fans in their backyard (or their mum's backyard) were nothing like the "real" films but they sure are fun to watch. And you don't need to ask; Yes, I also love films like VIOLENT SHIT 3 and stuff like NEKROMANTIK, THEY DON'T CUT THE GRASS ANYMORE, and the PLAGA ZOMBIE movies.

If you Google for reviews of these films you'll find a 100 so-called horror review sites that shits all over them. I really don't get it, these so-called "fans" are more fans of EXPENSIVE horror movies than they're true horror movie fans. I mean it's like they're too gone on everything having to be fucken WELL PRODUCED than it has to be FUN! These films were made by fans who had no money and thus often had budgets of around 20 dollars. But to me that don't matter none! What matters is whether they're fun to watch or not. GORE WHORE contains gore, gooey dildos, cool music, and nudity. What's not to like! Oh, and D'Lana Tunnell (hubba hubba) is in it as well. She was also in the AMAZING film SORE LOSERS that had Jack Oblivian (of the cool garage band The Oblivians) in it (as a rockabilly cat from the 50s who is sent to present day USA in his car to kill some guy!!) along with the way coolest band ever; Guitar Wolf!

So what happened with the director I hear ya ask. Well, he went off and started Draculina Publishing (that among other things publish the girlie horror mag "Draculina") and runs a mag/book eStore. I wrote to him last year and tried to get him to help me find these films but, well, I guess he doesn't give a fuck about them these days cos despite having sent him three emails (to a working address) he never bothered sending me an answer. Oh well, I found GORE WHORE anyway but it's a pity some people turn their back on their own past none-the-less. Oh well.
Posted by Jack J at 9:52 AM No comments: 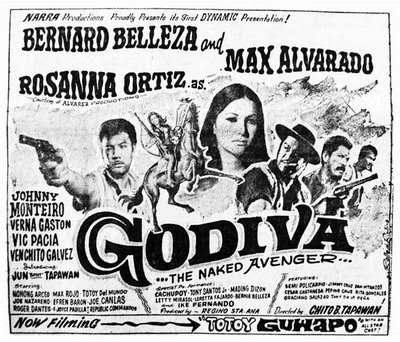 At a theatre near you soon (in some other dimension).
Posted by Jack J at 12:07 AM No comments: