A Book of Heroes - Yukari Oshima 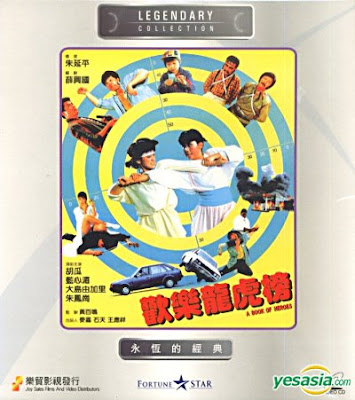 After having waited much too long for my recent parcel from Hong Kong to turn up (the bloody customs kept it for two weeks!!) I've finally just got it, opened it, and marvelled at the wonderful VCD beauties! Yes, bloody VCD!! None of the four films are out on DVD anywhere so this was the only option. But, hey, I'm not complaining and if anything I am grateful that at least Fortune Star have released these films is any format at all.

One of the films is A BOOK OF HEROES (Taiwan, 1986) starring cutie & tough ass kicker YUKARI OSHIMA. Woo-hoo! Any new Yukari Oshima film is welcome in this house not matter the qualities (or non-qualities) of the film otherwise.

I haven't watched it yet (like I said, I've literally just new received the parcel) but it's directed by the same guy who made the highly entertaining FANTASY MISSION FORCE, PINK FORCE COMMANDO and GOLDEN QUEEN'S COMMANDO. Here's the description from Yesasia (big kudos to Yesasia for actually hiring a HK film aficionado to do their film descriptions!! The writer is Ross Chen from Love Hong Kong Film.

From director Kevin Chu, the madman behind such entertainingly incomprehensible oddities as Fantasy Mission Force and Golden Queen's Commando, comes A Book of Heroes (1986). Chu's talent as filmmaker may be highly suspect, but his "best" movies are tremendous fun despite (or because of) their thematic and technical shortcomings. A Book of Heroes has all the usual Chu earmarks: an impossibly convoluted plot, confusing editing, cartoonish humor uncomfortably coexisting with visceral violence, and a bevy of butt-kicking beauties (including Oshima Yukari in one of her earliest roles). This is one movie not to be missed by Mystery Science Theater fans, or those who like their action movies highly fortified with corn.

Rival underworld gangs from all over Asia are waging war for a treasure map and a bunch of gold, and it's Officer Hu Pai's job to intercept the loot. After failing miserably at his assignment, Hu finds himself demoted to directing traffic. But the down-on-his-luck policeman gets a shot at redemption when he crosses paths with a Japanese agent (Oshima) on the treasure's trail. Joining forces with a ragtag group of mercenaries - including Hu's wannabe-cop sister and the owner of the local gas station - the heroes pit themselves against a wild assortment of underworld fighters in a bid to recapture the gold.

Hmm, that YouTube upload does have a great picture quality but I haven't been able to find any info about any DVD releases. Meaybe it's from a laserdisc.
Posted by Jack J at 2:58 PM No comments: