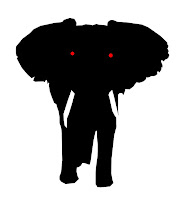 Fred Anderson of Ninja Dixon blog has just uploaded the trailer for his upcoming DVD release of THE KILLER ELEPHANTS (Thailand, 1976). Fred has recently launched a one-man company entitled ATTACKAFANT ENTERTAINMENT and besides THE KILLER ELEPHANTS Fred has also bought the rights for THUNDER OF GIGANTIC SERPENT (1988). These DVDs are not bootlegs or public domain crap but official DVDs. ATTACKFANT is based in Sweden and the two DVDs will carry English dubs. You'll find their Facebook page here.


And here's an old upload (from someone else) of THUNDER OF GIGANTIC SERPENT. Obviously, the uploader copied it off the IFD homepage and the picture quality ain't too happening but you'll get an impression of this crazy movie. The bad quality is of course not representative of how the new DVD is gonna look.


I wrote about the wild and crazy movie FIREFIST OF INCREDIBLE DRAGON the other day and here's a bit of new info from two nice gents; Knudsford of ASIAN CULT CINEMA SHOWCASE blog in Japan has provided highly interesting info on the film's origin and Peter "Kothar" from Cinehound has sent me cover scans for the French VHS and DVD releases.

Peter, along with my buddy David Z in the US, confirms that the French print is a good-looking letterboxed print and that it runs a whooping 11 minutes longer than the UK DVD!!!

Whether the French VHS and DVD contain the original uncut Korean print instead of the Tomas Tang version remains to be seen. One rather unfortunate piece of info I learnt via the British Board of Film Classification's (BBFC) homepage is that they cut out no less than 51 seconds of the UK DVD!!! As I wrote in my first post the film is also out on VHS in the US and I would assume that version is the uncut print (of the shorter Tomas Tang version).

Firstly, FIREFIST OF INCREDIBLE DRAGON isn't a Hong Kong movie at all as it says on the IMDb!

Obviously, I'm laughing my ass off here. xD
As soon as I saw that Tomas Tang moniker I suspected foul play but with info as difficult to come by in regards to an ultra obscure and rare movie like FIREFIST you sometimes got to run with what you're being given. Even shitty info provided by drunken IMDb monkeys.

However, here's the correct info which Tommy translated from Korean:

I'm a bit curious as to the 82 minute running time info. Peter tells me the French tape runs 88 minutes!!! Did the Koreans have a censored print or is it simply a misprint? 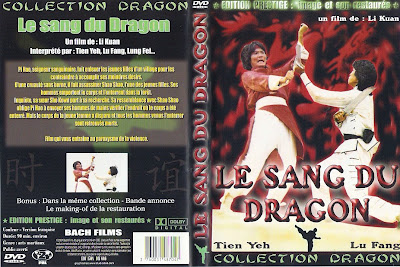 None of these two French covers are particularly good I'm afraid! Actually they're terrible at conveying what kind of film is inside the box! You would think this is an ordinary - and kinda boring looking - martial arts movie. Well, like I said (i.e. rambled about frantically) in my first post this isn't an ordinary kung fu film by anybody's standards! I would loooove to see this being given a proper release by Mondo Macabro!! Are you listening Peter Tombs!!! 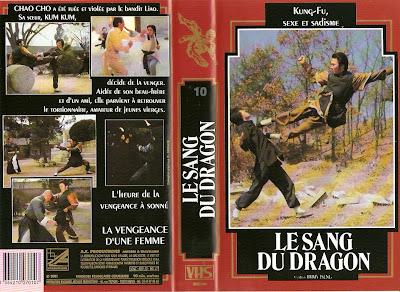 Big thank-you's fly out to Knudsford, Peter, and David!
Posted by Jack J at 1:35 AM No comments: