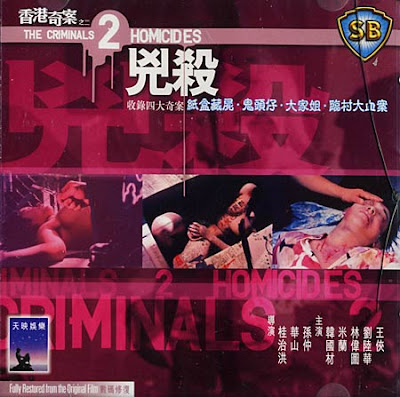 Way over a year after I wrote about the gritty Hong Kong crime film series THE CRIMINALS I've finally managed to track down an original copy of part 2, HOMICIDES. It never ceases to amaze me how quickly ordinary releases can vanish from the face of the Earth! These video-cd's were sitting on the shelves at dddhouse for a very long time and I had them bookmarked for months on end because I knew I was gonna order them at some stage - and then when I finally decided to get them... they were gone... from every store... everywhere. O_O

At dddhouse they were selling them for HKD 40 (US$5) apiece and I just spent 30 dollars US for a second hand copy from a seller on eBay France! And that's before postage. >.<

Now I just need another 18 months to track down part #5.
[insert smiley of cartoon character hitting himself with large mallet]
Posted by Jack J at 8:38 PM 8 comments:

It's time to celebrate. BRUKA, QUEEN OF EVIL just arrived at the door! Not my door mind you but at least at the door of another Filipino/worldweird collector, Andrew Leavold. This is truly amazing! We never thought this would materialise, this was considered lost. Truly and purely awesome. If you haven't already then check this bat crazy trailer (or check it again!).
Posted by Jack J at 3:45 PM 4 comments: