Patrick B. has this trailer on his blog so I'd better have it on mine too!

-And the truth behind the film: 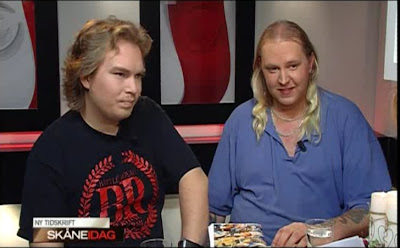 It's not every day fanzine editors are interviewed on live TV about their publications (at least not on these shores) so big congrats go out to the two editors of Gory-Glory Magazine, Carl-Johan Rudnert and Magnus Carlsson, who were on local television in southern Sweden yesterday. Good on ya, fellas! The interview was part of the "Skåne idag" program and ran for about 10 minutes. You can watch the whole show online but (unfortunately) you have to sit thru about 25 min. before the interview. Gory-Glory interview.

The female interviewer (a real sötnös, rauw) asked the editors about how long it had taken to make the magazine, why they do it, and what kind of films they watch. She seemed surprisingly unaware of what was actually in the mag as she flicked thru it during the interview and proclaimed she couldn't take horror movies (because THE EXORCIST scared her), haha. Oh well, she did look cute so she's forgiven. At the end of the interview there was also a contest where you can win an issue of the mag (cheapskates! LOL) and the question is who is the pride of Landskrona in the horror movie field. Someone who starred in some of Lucio Fulci's films in the 80s. Hmm, how about Janet Ågren, lol. 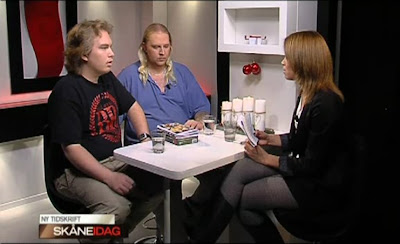 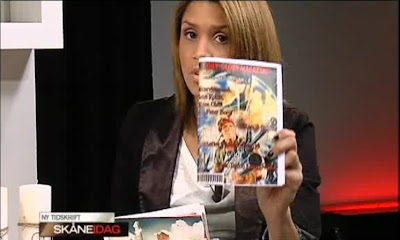