BASED ON A TRUE STORY (Roman Polanski, France 2017) 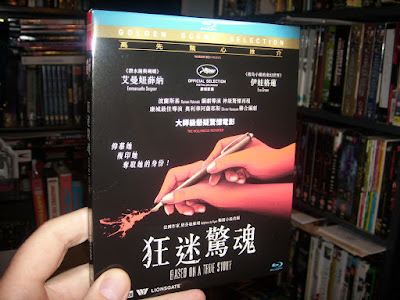 I finally received the blu-ray release of Roman Polanski's BASED ON A TRUE STORY that I had ordered from dddhouse in Hong Kong more than a month ago. I watched it right away. I didn't know what to expect as the most recent Polanski film that I've seen is his THE NINTH GATE from 1999. I was wondering how "good" he is these days – I mean, films like ROSEMARY'S BABY, REPULSION, CHINATOWN and BITTER MOON are all masterpieces in my view.

I quite liked the film but I must admit it's what I'd call "Polanski lite". It's not up there with his big ones of yesteryear (or rather "yester-decade"). But even so it was a good little thriller. And of course Polanski is Polanski so even "Polanski lite" is good Polanski if you ask me.

I certainly have little understanding for Peter Bradshaw's stance when he basically writes off the film as being nothing but "flat" in The Guardian (link to review). He compares it to the Polanski masterpiece ROSEMARY'S BABY. Dude, everything comes off flat when you compare it to a masterpiece like ROSEMARY'S BABY! It's not a fair comparison. Besides, Polanski is in his mid-80s now and the film is made on a small budget in Europe. Context, please.

The plot deals with a successful female author – played by Polanski regular Emmanuelle Seigner (an actress that he doesn't have to pay as he's married to her, haha) – and a very persistent female fan (played by Eva Green). Dominique Pinon (from DELICATESSEN) has a small part. I'm not gonna waste any further time going into incisive plot details as nobody reads blogs anymore anyway.

Unfortunately, it seems Roman Polanski's newer films are getting hard to find in the English speaking territories because of the witch-hunt against the director due to things that happened in the 70s. I find it ridiculous that film fans have to pay for something that a film maker did (and should be punished for). BASED ON A TRUE STORY hasn't been released on dvd or blu-ray in any country that has English as its official language. Well, unless English is still  considered an official language in Hong Kong. As I mentioned earlier the film was released on blu-ray in the old British crown colony. As I write this you can still get it from dddhouse. Direct link here. Several of Polanski's films are out on blu-ray (and some of them also on dvd) in HK.