Everybody talks about THE STOOGES and people forget the many good years IGGY had in-between. "I'm a Conservative" is an awesome track from his "Soldier" LP from the early 80s. The studio version is the top video and here's a brilliant live version of the same track. You'll be excused for wondering if he's really a conservative. That's is until three minutes into the video and you discover he's wearing nothing but women's underpants.

I bought "Soldier" and two other early IGGY POP LP's in a cool and cheap CD box set recently. The cool thing is not least that as far as I can tell it's not been remastered and thus doesn't suffer from the "loudness war" effect. The set is simply entitled "Original Album Classics" and the other two albums are "New Values" and "Party".
Posted by Jack J at 9:41 AM No comments: 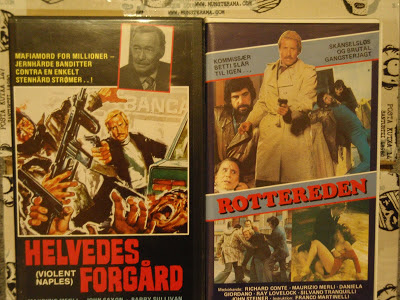 What a fershtunkener afternoon! Arr marone!!! I was gonna watch two poliziesco films of the finest calibre, VIOLENT NAPLES and VIOLENT ROME, both starring Italy's own Dirty Harry, Maurizio Merli. I'd pulled out the uncut, English dubbed, letterboxed Danish video tapes (released as "Helvedes Forgård" and "Rottereden"). I've got my coffee, I've got my lollies (which some of you call candy or sweets), I've got the blinds down, and I've got the phone off the hook. Perfect. Now, what I don't need is for the first tape to say, "Grrrrrrreeee". I try and fastforward and it sounds like one of those grindgore bands that some of you listen to. Major worry. So I try it on the other VCR. Same result. And now the tape won't even rewind. So I try the first VCR again. Now it rewinds but won't play at all.
I try 5 times. Same result. So I try it on the second VCR again, now the tape plays... and stops again after 10 seconds. I try 10 times. Same result. Major bummer. I consider to just skip it and watch the other film - but no, I'm like a spoilt brat now I W-A-N-T to watch that film. I'm about to have a hissy fit. I'm about to yell and throw things at the wall. So I do what I always do in those situations; have another cup of coffee and think rationally about the problematic situation! At this point I'm thinking I might as well skip the film viewing and try and repair the tape. I open the tape case and discover one teeny weeny little piece of plastic has come undone. I put it back and close the cassette again (which takes me 15-20 minutes cos those damn things are always a pest). Finally I put the screws back in, put the tape in the VCR, and it works like a charm. My gawd, it took like an hour to fix that tape. Anyhoo, fortunately the tape wasn't damaged and the picture is crisp clear and looks awesome. Brilliant! Halfway thru VIOLENT ROME I fall asleep. >_< (i.e. during the second film and only because I'd been awake for 24 hours, certainly not because the film is boring cos none of them are!) 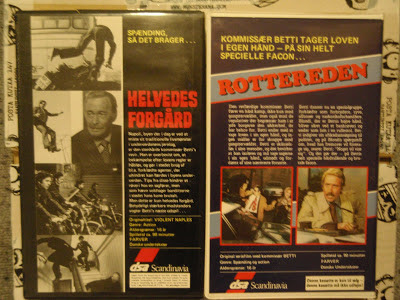 Diabolik's upload of the Danish trailer for VIOLENT ROME.
Posted by Jack J at 2:49 AM No comments: